The Connection Between Astronomy and Financial Markets 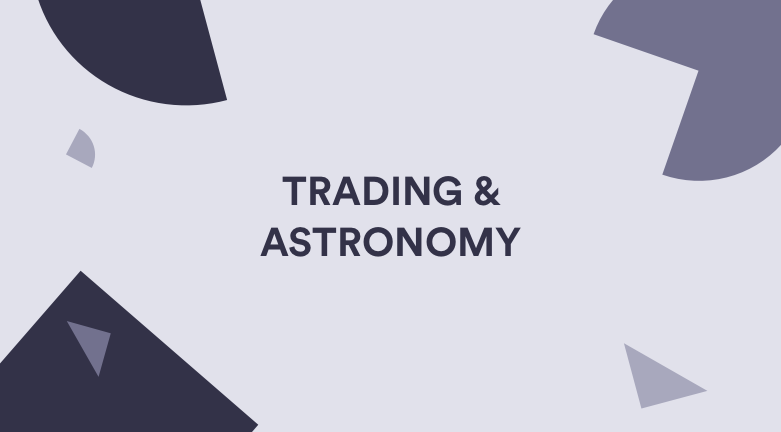 Did you hear that biological and psychological research in the past suggests that lunar phases might affect human behaviour and mood?

Me, being a price action trader have never tested these claims in practice, but I do know some facts that connect astronomy to the stock market in general.

Unlike astrophysics, astronomy is a pseudo-science but nevertheless, many traders use the principles as they are at least interesting to mention and investigate.


Fibonacci and the Golden Ratio in Nature

The origins of the Fibonacci sequence are well known to architects, artists and technical analysts, but knowledge of the importance of the Golden Section was known further back in ancient history, definitely as far as the Greeks and, depending on which source is read, as far back as the ancient Egyptians and Sumerians. However, evidence for understanding and usage in ancient Sumer is tenuous at best.

There are many volumes that look at the interesting properties and occurrences of this ratio in nature. Some key examples of this are the famous nautilus shell chambers, the sunflower head seed pattern and the spiral in a galaxy, and in architecture, the ratio of the length to the width of the Parthenon of Phidias, which is seen as the epitome of classical proportion. In other art forms such as fresco and oil painting, the proportions of the setting are often seen in the above ratio, especially in the work of Leonardo da Vinci and in the 20th century in the religious art of Salvador Dali. Closer to home, the human ear length needs to be 1.618 greater than the width to be said to be ‘in proportion’, as are the relationships between limbs and the ratio of the navel to the feet and total height, as in the work of Le Corbusier (Charles Edouard Jeanneret).

Fibonacci and the Golden Ratio in Universe

New research on this subject claim that the golden ratio – 1.618 – can be seen ‘elated not only to aspects of mathematics but also to physics, chemistry, biology and the topology of space-time. Spiral galaxies such as our Milky Way also follow the familiar Fibonacci pattern. The Milky Way has several spiral arms, each of them a logarithmic spiral of about 12 degrees. As an interesting aside, spiral galaxies appear to defy Newtonian physics. As early as 1925, astronomers realized that, since the angular speed of rotation of the galactic disk varies with distance from the center, the radial arms should become curved as galaxies rotate. 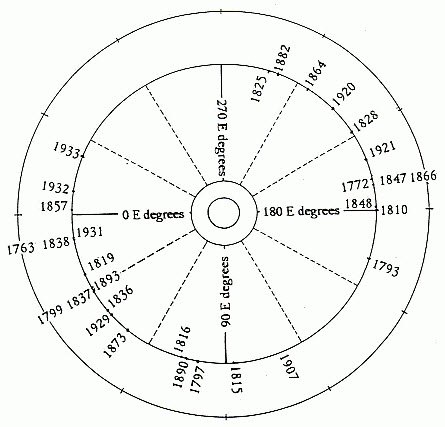 This diagram is showing the Ecliptical position of north node at the time of all major crises listed by Kindleberger (Appendix B, 1996) for the period 1755-1940. For crisis years with no given month, the north node is taken as occurring on July 1. For crises given as multiple months, the north node is timed mid way between the first and last crisis month. The source states that the concentration of the north node in the segments 0 – 45 Eo & 180 – 225 Eo for the timing of major financial crisis is probably linked with the equinox points 0 Eo/180 Eo, where the celestial equator intersects the ecliptic. As the Moon’s nodes move retrograde (clockwise) around the ecliptic, major financial crises are most likely to happen in the few years prior to the lunar nodes reaching the equinoxes. 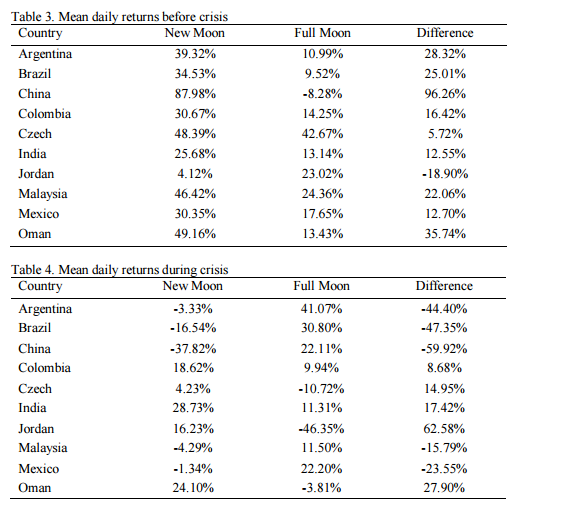 How Does it Work

The human body is about 75 percent water, and people often ask whether tides are at work inside us.
The moon and the sun combine to create tides in Earth’s oceans (in fact the gravitational effect is so strong that our planet’s crust is stretched daily by these same tidal effects). The ocean on the side of Earth facing the moon gets pulled toward the moon more than does the center of the planet. This creates a high tide. On the other side of the Earth, another high tide occurs, because the center of the Earth is being pulled toward the moon more than is the ocean on the far side. The result essentially pulls the planet away from the ocean.

Tides are large-scale events, but nevertheless within the human body there is enough water to cause some effects on smaller scales and we can read it in the paragraphs below.

Lunar Phases and Emotions in Animals: The Primal Instinct

For millennia, humans have wondered if the Moon pulls at us with something more than its reflected light. Pliny the Elder observed that, in combination with the Sun, the Moon draws up the tides. Pliny and his compatriots also argued that this lunar force – now known as gravity – pulls on the moisture in our bodies, within our watery brains.

That can cause a misbehaviour with animals and some researchers have found that lion attacks on humans were most likely in the 10 days after the full moon. Other studies suggested also that:

The conclusion of studies is that most species have the innate clock that works synchronous to the moon cycle even if the Moon is not visible.

How the Lunar cycles Can Affect Human Behaviour

You have probably read many times before that full-moon nights are full of accidents, injuries, and people in distress. I want to stress out how important is the effect on human emotions generally and that maybe in some sense it can be connected to our subconscious patterns that are so hardly engraved within animals and mammals alike. Call it instincts. Can those instincts go haywire on Lunar cycles?

than 1% of variation in behaviours termed ‘lunacy’

Finally, despite a persistent belief that our mental health and other behaviours are modulated by the phase of the moon, there is no solid evidence that human biology is in any way regulated by the lunar cycle but it seems that it might affect the human behavioral pattern. Some people in smaller percent can be more emotionally calmed while other might be too ecstatic. Your emotions are you worst enemy and if you can’t control your emotions you won’t succeed in trading.

A deep study comparing a Moon Phase Strategy (MPS) versus a Sit and Hold Investment strategy on US Equities showed mixed results during back-tested results. The limitation of the study, is that the Index performance can be impacted by dividends paid out, which the study fails to recognise. Nonetheless, the MPS strategy didn’t turn a negative result to a positive result during the bear year of 2008. The conclusion is that markets are driven by financial facts and expectations rather than by the motion of celestial bodies. The exception can be a proof that financial developments in macro and micro scale are caused by the motion of celestial bodies. We haven’t seen that study ever since.

I have been a long time member of Forex Factory, the famous website. I have seen many threads devoted to Astro trading and Planetary Cycles trading, so feel free to navigate and find if this kind of trading can be beneficial for you.

As the cosmos does impact the earth, there are still a handful of techniques to keep your psyche in check and refrain from reckless decision making caused by cosmic activity. After all, what I have been trying to connect throughout in my research is a conclusion that the Lunar cycles cannot determine the outcome of Forex and stock trading in its own sense, but the moon cycles may affect the individual mood and thinking, and may lead to stock market changes. From a trader’s perspective, it is clear to me that further research is required in the field of behavioral finance to examine the relationship between the lunar cycle and investor behavior.