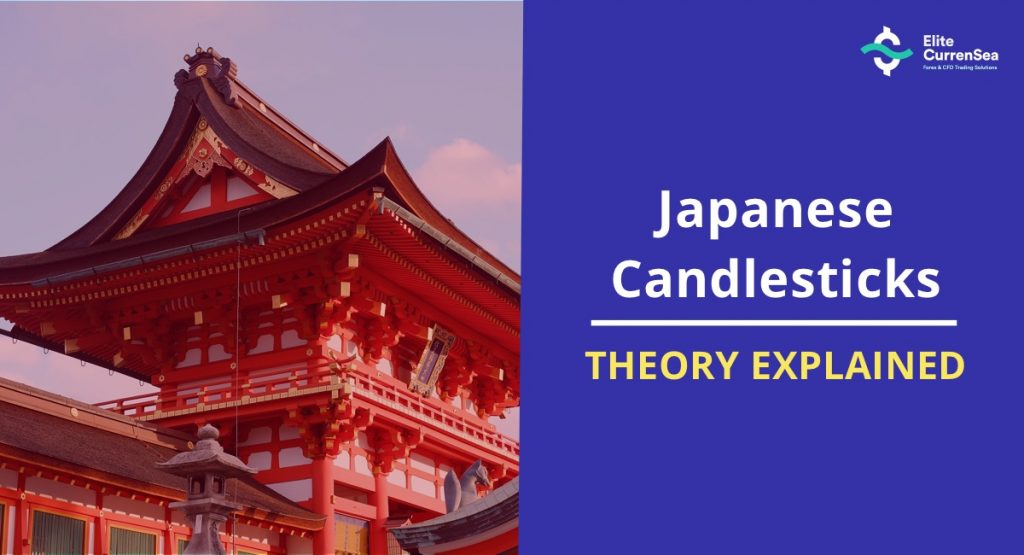 You probably agree that price is the most important aspect when analysing the charts. But what actually is price?

Some traders prefer to emphasize the close of price (line charts), others only want to see when price has moved (renko/range charts), whereas some prefer to show the battle in each candle (Japanese Candlestick).

In this article, we want to explain what the Japanese candlestick is, what does it represent, and how do candlesticks help traders make money.

The man who brought candlesticks to the West is the famous trader Steve Nison, who wrote a book in 1991 on the subject: “Japanese Candlestick Charting Techniques”. Nowadays candlesticks are widespread around the world of trading, and it is one of the most used methods.

A candlestick (candle) tells us a story about price. It tells us what happened in the past and what could happen in future…

Let’s start with the basics… Candlesticks tell us what the opening price, low price, high price and closing price was in that specific time frame.

Candles tell us how price moved on that time frame: 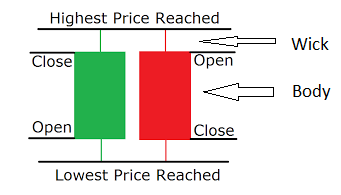 Each Japanese candlestick offers a ton of information when compared to a line chart (only has candle close) because it shows the candle open, high, low and close. This allows traders to understand the battle between bears and bulls in a deeper context – see video below about wicks.

Although every candle gives traders a chance to analyse what is going on right now, Japanese candlestick patterns offer even more value to traders. Why? Because they show when and where the market sentiment is confirmed or invalidated.

A candlestick pattern can consist of one, two or several candles. First, we will look at single candle pattern. 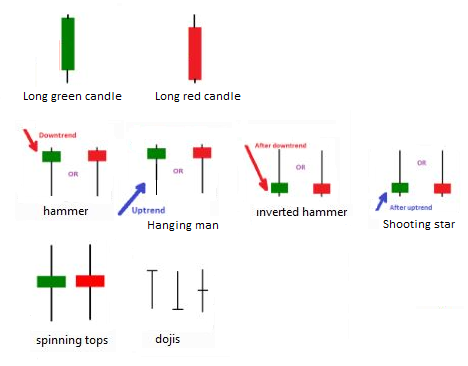 Bullish Marubozu (Japanese word for bald) is a long green candle and has a long body and no wick or just a small one. In practice, if the wick is up to 20 per cent long, the candle is still considered as a strong bullish candle. Bearish Marubozu is a long red candle with little wick at the bottom. This strong candle is telling us that bulls and bears are in control and that momentum is present.

A Hammer has a long wick and a small body. It appears in a downtrend and signals that a trend might come to an end. The Wick should be at least twice the size of the body. The longer, the better.

A Hanging man looks just the same as the hammer but it’s positioning is at the top of uptrend and signals that bulls are losing steam, a trend change is possible. Bears are stepping in, and it might a good idea to trail stop the loss.

An inverted hammer is, as the name suggests, the hammer which is inverted – turned around. Since the beginning of the session, bulls have been in control, but then bears went in counter-attack and pulled the price lower. The longer the wick, the better, but it should be at least twice the size of the body. An inverted hammer is positioned at the end of a downtrend. If it is positioned at the top of an uptrend, then it’s not an Inverted hammer, but rather a  shooting star.

Shooting star form at the top of uptrends. It looks just like Hammer but signalling that bulls may losing control. Like a hammer, length of wick is important. It should be at least twice the size of the body. The pattern is more bearish if the body is red. However, the green body still signals a weakening of uptrend momentum. High of the wick is short-term resistance. If it is broken, a shooting star is invalidated.

When we are talking about the hammer, inverted hammer, hanging man or shooting star, than you need to know that the colour of the body doesn’t play a big role. But it is true that a bullish body means stronger bull control when we are looking for a long position, while the  red body means stronger bear control.

Doji’s and spinning tops are neutral candles. Doji open and close are roughly the same while the upper and the lower wick is the approximately the same length. Example: The session opened, and bulls (or bears) took control. After a while, the control was lost, and the other side turned the tables but then also lost control and session ended where it began. The Doji signals indecision. High and low are important. When high is broken, it is a sign that uptrend is possible. A broken low is a sign of weakness, so the downtrend is possible.

The spinning top is similar to Doji, but it has a small body. The colour of the body is not important. It is also a sign of indecision. A closing above the spinning top high.

Now let’s look at what a single candle pattern can tell us in combination with other candles. 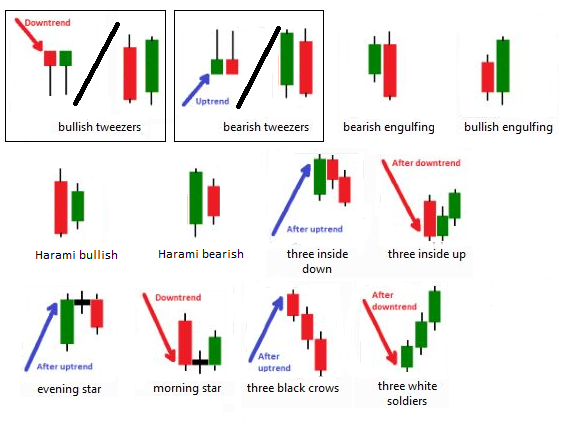 Bullish tweezers are printed at the end of a downtrend. Pattern assemble two candles with a lower wick which are roughly the same size. It signals that bears may lose power and bulls are stepping in. The opposite is true for Bearish tweezers.

Harami is a two candle pattern, and it looks the opposite from engulfing pattern.  Harami is the Japanese word for pregnant. It’s like the mirror picture of engulfing candle. The first candle is a strong bull candle and completely cover second smaller candle. The smaller candle is a sign that bulls are getting tired. If the first candle is bullish and second is bearish it is considered a bearish pattern. If the opposite is true than it is a bullish pattern. It is usually a wise decision to wait for the third candle. Usually what happens if a formation of a three candle pattern – namely Three inside down.

Three black crows is a bearish pattern located at the end of an uptrend. The open, high, low and close of the second candle is lower than the first candle, and those are also lower on the third candle than the second. Bears are in control for all three candles. But be aware if three small black candles appear in a strong uptrend, and they are located inside the bigger and stronger bull candle. This is continuation sign and it is not the Three black crows pattern.  Opposite from Three black crows is Three white soldiers pattern.

Candlestick pattern is a very powerful concept used by many traders. In this article we introduced the basic patterns. But it is crucial to know that not every candle is important.

Multiple candle pattern has more information about what is going on, who is winning the battle, who is losing steam. The pattern which consists of several candles is therefor stronger than a single candle pattern. However, that doesn’t mean one candle pattern is not important.

What pattern trader use as a signal will depend on your trading style. More aggressive trade will enter the market when the hammer prints on the chart, while a more conservative trader will wait until the morning star is developed.

If you are not sure, try ecs.LIVE, SWAT or CAMMACD to improve your odds of success.

Two things seems certain – candles give traders valuable information and it is always smart to combine the patterns with other indicators, trend line analysis and other price action tools. It is always a good sign if we see the morning star pattern at the end of Elliot wave two or four.