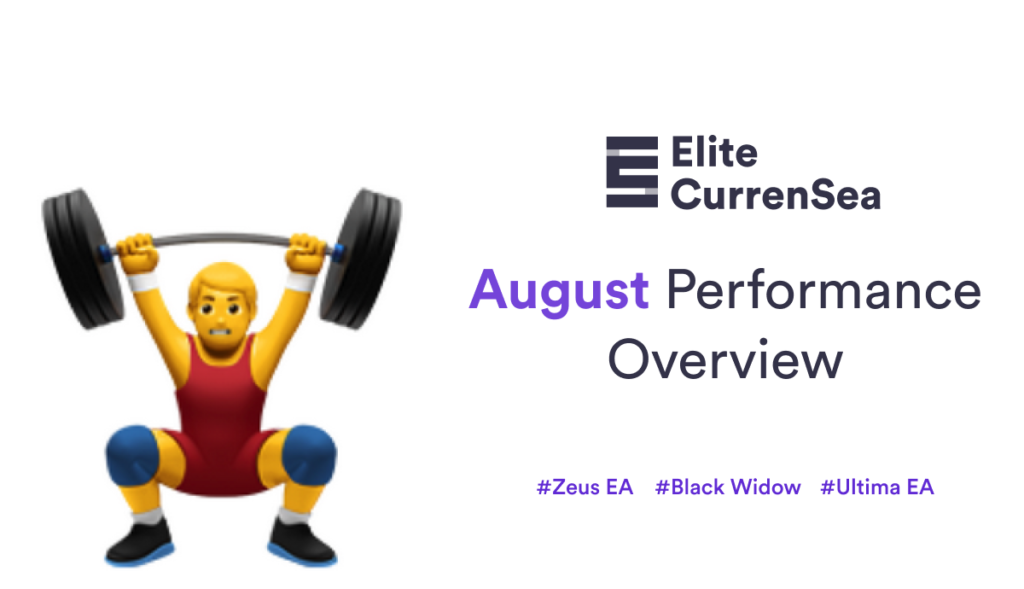 With the summer “finally” behind us, the team of Elite CurrenSea is back on track with a bag of tricks and decent results to show off. We also have new products and offers for everyone who shares our eagerness to combat the markets and hopefully sweeten the pill 2020 has been pushing down on us. Let’s cut to chase now.

The Zeus EA managed to gain another +8.16% in August in a very stable month, even by our standards.

The Ea’s been performing as per the backtesting and live trading of the past two years, giving us more confidence to offer it to our institutional and retails partners alike (more on that below).

August has shown us EURUSD testing the 1.20 mark, and despite the dancing around that level without much sudden movement, the volatility has grew, which allowed ZEA to gain a pretty good momentum – hence the 8.16% growth without significant drawdowns.

The pips value is not that important because the grid system works in a way that the first deals are opened with the smallest volume.

However, later trades bring in more profits since the EA closes all series with a plus according to the math behind the system. Pips are therefore negative but income is positive.

August performance of the Black Widow method consisted of an impressive 16 wins and 2 losses which has put the Black Widow ahead of many semi-automated trading systems with high accuracy builds.

Quality hack is something that is very true for the Black Widow system. A specific combo of indicators made to fine tune the system and the MTF approach can only make a trader’s life easier. We will soon release the Black Widow to the public and traders will be able to purchase it online via our website.

We know exactly where the markets will reverse thanks to our exclusive combo of camarilla pivots and ATR levels (Reverse indicator).

We also use the custom coded 3 MTF indicators for trend and range filtering. Nenad has put the huge number of hours into the system development and the code in the system isn’t simple at all, yet the system is very powerful. The public release should happen very soon and the ecs.LIVE members can enjoy the powerful signals from the Black Widow system.

A special-one is still going through a bit of a stagnation period (still in line with the historical performance), but if you are following Chris’ automated-trading webinars and reading up about Ultima on our website, you should be mentally allied with us on the performance.

It’s painful to see trades rushing into the UEA after seeing a few months of good profits – only to witness pull-back, whereas, ironically, the best time to get in might be precisely after the stagnation or even a DD times.

Now, we don’t encourage you to abandon your judgment, but you may see a pattern if you look at the performance throughout the years. You can grab yourself a UEA rental or top-up you PAMM with KTM or AvaTrade by following our website’s instructions. 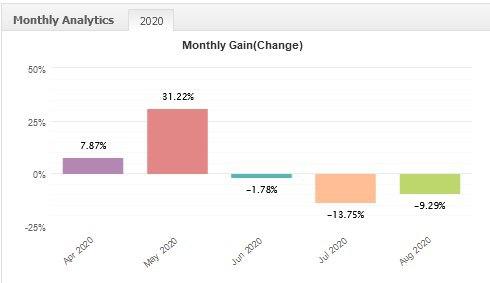 The EA made an over 30% comeback in the middle of August, followed by a pull back into where it started in the beginning of August. It’s up to you to decide whether you have the patience to stick to the EA for when it finally catches the market by the throat.

Back to normal? August saw a further reduction of volatility. Also the side-ways market for most of the month helped to restore the necessary cyclicality for our strategy in various tickers.

The uptrend did resume but only in the last period of the month, which created new all-time highs in the S&P 500. The opportunities for entry were the same as the month of July, but profitability was much better. We closed three signals in profit with an average profitability of 9,9% (based on portfolio). As of August 31st, two signals are still active: one in profit and the other one is at break even.

Let’s move to what’s new in-store for September. Given the recent development with COVID-19 & Geo Politics, it’s hard to call this exactly “back to the usual”, but we hope you see it as exciting as we hope it will become, should you decide to opt-in!

Starting at €499, this is Nenad’s first array into fully-automated EA territory. With a small number of trades, the strategy’s an account builder tool.

As you can see from the 99% model-accuracy backtesting, the software builds up the capital as it progresses in time.

We’ve been running the EA live since the middle of summer with minor movements up and down.

The best news, you can grab the EA for free with two brokers (HYCM & AVA Trade) that were eager to sponsor the offer for the first 15 traders.

LOA.EA has no preference for the deposit amounts, but we don’t see why anybody would invest less than €1,5k.

To get the EA, go through our partner link (HYCM or AvaTrade), verify the account, and add it to your broker. Don’t forget to use a VPS never to miss a trade. Send us a message if you need help with picking one.

Black Widow (previously known as cammacd.EA) approach is the result of Nenad working his way up the Forex pedestal ranks while fighting an unfair battle against, particularly unpredictable markets circa 2020.

The system will be available at a retail price of €744 (40% off in september) and come with an extra month of ecs.LIVE.

ZEA is quickly becoming our client’s favorite, with a predictable equity curve (talking to you Ultima EA ?). Not too bad for a grid strategy!

The profit share model is the next step in offering a more portfolio like approach to our customer base.

You can start with Zeus without an upfront cost and complicated equity per EA requirements. Just plug and play by joining our KTM Pamm.

P.S. We also have smth really exciting to share, but we really can’t right now ?… hopefully, you’re gonna stick around for that as well!

🔥 Trade the London Open Automatically on EUR/AUD and Bitcoin 🔥

EUR/USD Might see a Pullback to a Strong Resistance Zone

How to Pick a Trustworthy Automated Forex Strategy