Bitcoin 2021 vs Bitcoin 2017: How The Bull Trends Are Similar and Different 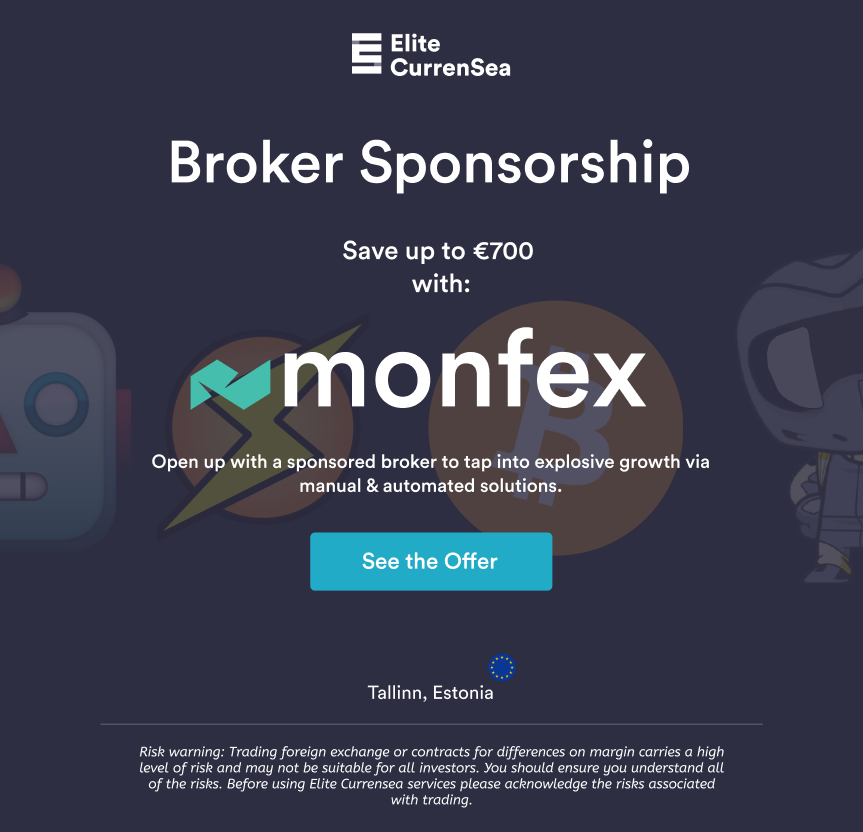 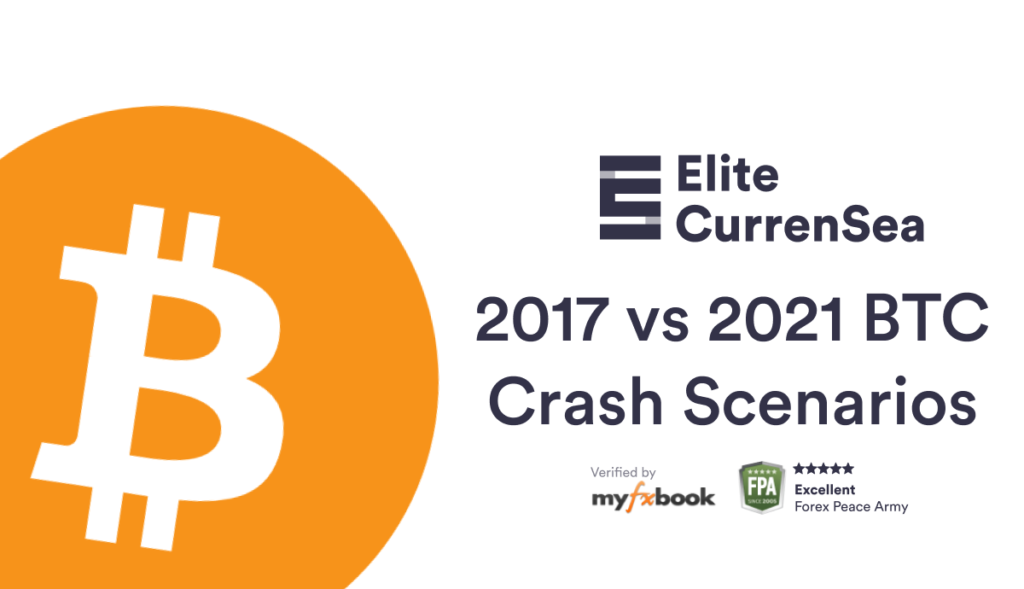 Bitcoin Bull Run Explained from A to Z

The World of Cryptos and Bitcoin: an Introduction

Bitcoin is again making headlines in the financial news. After a strong bullish run in 2016 and 2017, the cryptocurrency giant went into a winter sleep for a few years.

But since the 4th quarter of 2020, the world’s largest cryptocurrency in terms of total market value is fully awake again and roaring out loud.

Between 1 October 2020 and the end of May 2021, Bitcoin has managed to evoke joy and fear again in a very short time frame. For both the largest Bitcoin supports and its largest critics.

Most traders are asking themselves this: how long can this 2021 bull run keep going when comparing it to the 2017 uptrend?

In this article, we try to answer this question. But we also make an attempt to compare the 2017 and 2021 bull runs with each other. What are the similarities and differences? Let’s find out.

Record after record was set when Bitcoin was moving up higher in 2017. The uptrend actually already started around October 2015 according to our definition of a trend.

The 2017 Bitcoin bull run lasted till December 2017 for a full 2 years and 3 months (total of 27 months). Most of the weekly candles closed for a higher high (see image below).

The BTC/USD uptrend tested and bounced at the 21 ema zone of the weekly chart for a total of 6 times. The 7th attempt to test the 21 ema indicated the end of the uptrend.

Now let’s compare the 2017 bull run with the current one:

If the 2021 uptrend on Bitcoin were to stop right now, right here, then it would be substantially smaller than 2017. In fact, the most recent pullback on the weekly chart that took place on 17-20 May 2021 was only the second test of the 21 ema zone since the uptrend started in mid March 2020.

If we assume that the 2021 Bitcoin uptrend would be equally strong as the 2017 uptrend, then the uptrend could develop as follows:

So far, despite the decent growth in 2021, the bull run has been modest.

The end of the Bitcoin uptrend in 2011

Let’s review the end of the trend in the year 2011 in the image below. As you can see, the 21 ema zone on the weekly chart was broken and price action failed to break above it again (red box). This marked the definitive end of the uptrend, even though price action (orange arrow) and time patterns (orange box) already provided earlier signals.

The end of the Bitcoin uptrend in 2013

Now let’s review the end of the trend in the year 2013 in the image below. The pattern is quite similar to 2011. First there were candlestick patterns (orange arrows) warning of a reversal. Then there was a time pattern where 6 weekly candles failed to break for a new high. Followed by a break below the 21 ema zone and inability to break above it again (red box).

The end of the Bitcoin uptrend in 2017

Now let’s review the end of the trend in the year 2017 in the image below. The pattern is a bit different than 2011 and 2013. There were candlestick patterns (orange arrows) warning of a reversal. But before the time pattern was confirmed, price action had already moved down quite a lot. The break below the 21 ema zone and inability to break above it again (red box) was again the full signal that the uptrend was over.

The end of the Bitcoin uptrend with the current 2021 run?

Now let’s review the weekly chart in 2021 (end May) in the image below. As you can see, no substantial weekly reversal patterns are visible as yet. Not in our eyes at least. This indicates that the uptrend might not be over yet.

The time patterns are showing a more dangerous spot, however. The current week is the 5th, which means that the immediate uptrend has only about 2 weeks remaining to close for a higher high. Considering the strong decline, this seems to be a tall order. This means that a period of consolation could take place in the near future. The uptrend could still continue after that corrective period as long as price action can break above the 21 ema zone.

The 21 ema zone has now been tested for the 2nd time. But price action has broken below it, which is a first bearish signal. That said, the candle close seems to be pushing the price back up again.

If we can learn anything from the past, then it is clear that a break above the 21 ema zone is much needed to keep the uptrend alive.

If price action goes sideways too long, then also a break above the resistance fractal is needed as well.

If price action fails to do so, then a larger retracement will quickly become more likely.

Similarities Between Bitcoin’s Uptrend in 2021 and 2017

Some things never change, even in the world of cryptos and Bitcoin. One of the main aspects that remains unchanged is Bitcoin’s price volatility.

Bitcoin’s price volatility was high in 2017 and it remains high today in 2021. The strong price movements up and down is a constant factor. At least for now. The price stability could change when the Bitcoin and cryptocurrency market become more established.

In the past 10 years, however, Bitcoin has been one of the best performing currencies (see image below). 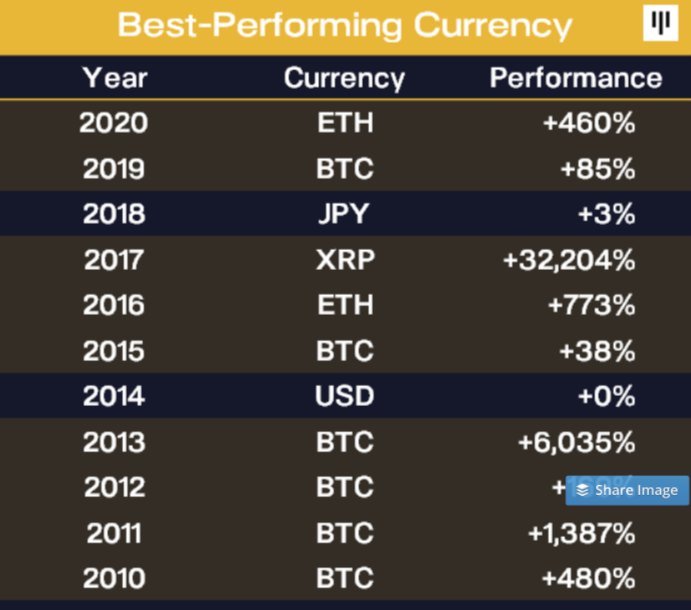 Bitcoin works in an opposite logic when comparing it to fiat currencies or quantitative easing. AS time passes by, less and less Bitcoins are added to the global supply. And after the year 2140, no extra Bitcoins will be added at all. At that moment, the Bitcoin quantity will be the same and stay the same forever. The total circulation will be 21 million coins.

This slowing down process is exactly the opposite of fiat currencies and quantitative easing, because central banks are continuously adding more money supply to the economy. The addition of money is often a good thing. Why? Because more money and low interest rates can help combat deflationary cycles and recessions. But this remains true as long as the economy remains in “balance” and does not overheat. Otherwise it could trigger high or hyper inflation levels. Bitcoin has more freedom than a fiat currency because it is not tied to one single economy or economic zone. In that way, Bitcoin is more similar to Gold, but with a clear finite and shrinking supply schedule.

The decreasing supply has an impact on price. When the supply is cut in half, the price has usually increased after these halvings: “Bitcoin has historically bottomed 459 days prior to the halving. The price has then climbed leading into the halving date and then exploded to the upside afterwards. The post-halving rallies have averaged 446 days — from the halving to the peak of that bull cycle. In this cycle, the market did in fact trough 514 days before the halving. IF history were to repeat itself, bitcoin would peak in August 2021.” (Source Panteracapital) 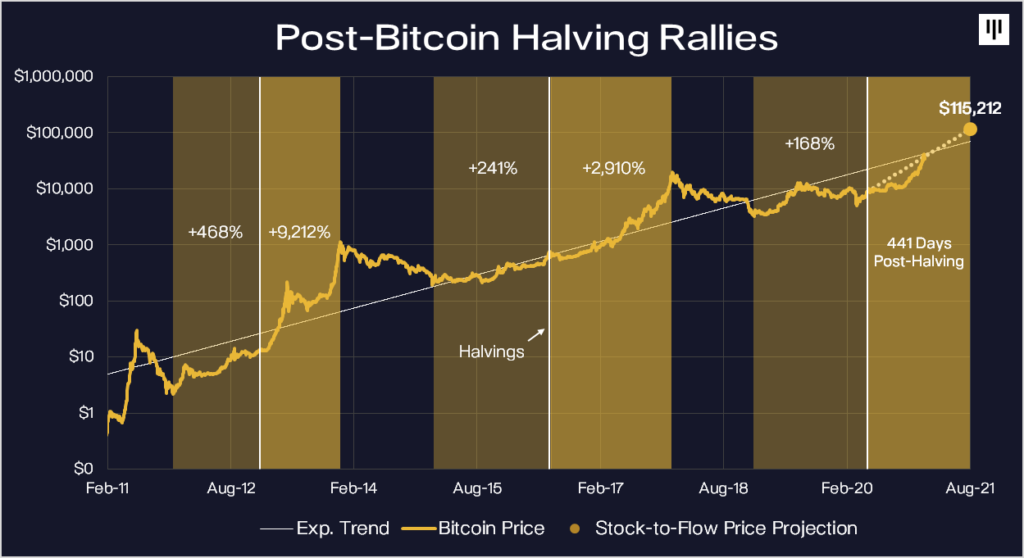 Differences Between Bitcoin’s Uptrend in 2021 and 2017

In 2017, the cryptocurrency market was all about ICOs, initial coin offerings. Buying Bitcoins offered investors a way into this market. Unfortunately for many investors, ICOs were very inflated and over-hyped. Many did not deliver even close to what was promised.

When Bitcoin made its price peak in December 2017, it had only captured 39% of the market share of the industry. In the years 2020 and first quarter of 2021, Bitcoin’s share was much more dominant. Bitcoin had a market share above 70% at the start of 2021.

That said, this trend has reverted as well. Ethereum is grabbing some of that share since its strong surge started at the end of March 2021. At the start of May 2021, Bitcoin’s market cap share had fallen again below the 50% and stands at around 46%. This percentage is very volatile as the price movements remain large.

In any case, whether it is Bitcoin, Ethereum or other stable altcoins, the attention in 2021 is more on existing cryptocurrencies and their actual coin performance and characteristics rather than on ICOs and their white papers. In other words, more emphasis is placed on the current status of the coin rather than hopes and dreams of future coins. 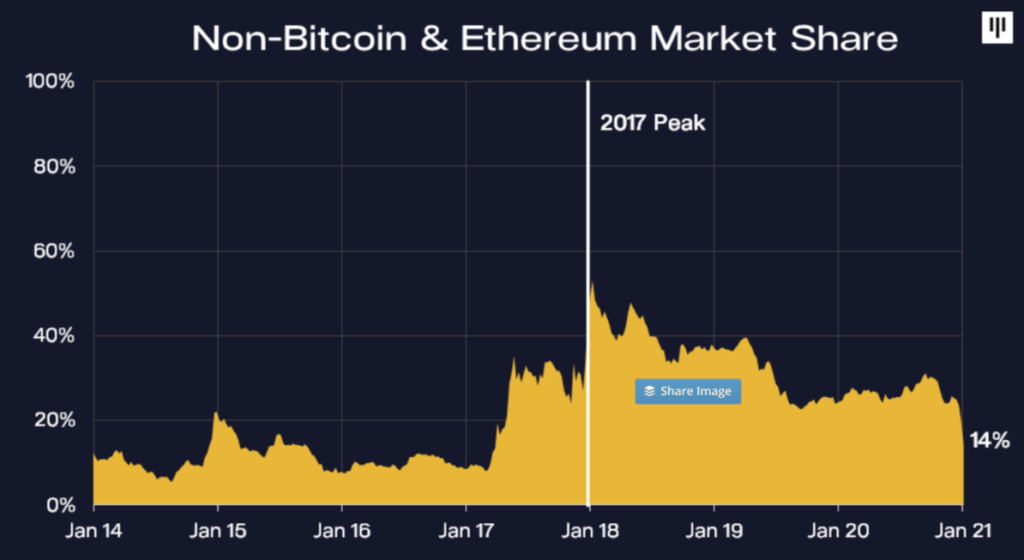 Bitcoin is not a coin anymore that you simply exchange for a pizza like in the previous decade. More and more Bitcoins are being used for investment purposes. They are not used or traded, but simply owned for investment purposes. According to Bitcoinmagazine, 61.31 percent of all Bitcoin in circulation has not been moved in over a year and less than 15 percent of it is actively traded on exchanges. 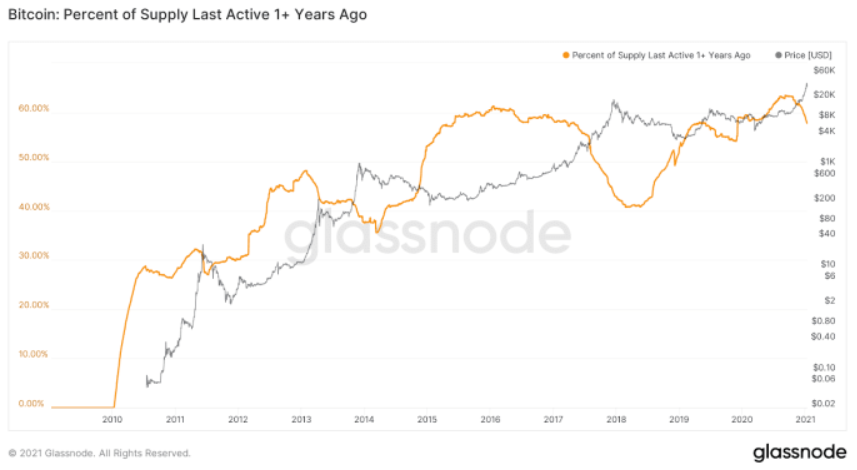 As the price is increasing, it seems to be squeezing out the average investor as well. Billionaires and companies seem to be the ones making the purchases in this rally. For instance, Tesla bought $1.5 billion in bitcoin in February 2021. Billionaire Michael Saylor recently announced more Bitcoin purchases as well.

More than 35 percent of institutional investors see value in bitcoin according to a Fidelity report from June 2020. These investors are also far less concerned about price volatility and market manipulation than they were before.

Last but not least, Bitcoin in specific and the cryptocurrency market in general seem to be heavily dependent on the tweets from Elon Musk. The Tesla CEO and billionaire is regularly sending his thoughts via tweets about the state of the cryptocurrencies. This is seemingly having a heavy impact on price volatility as his ideas and words are weighed. Negative looking comments are sending the price down lower whereas words of encouragement are sending it higher. This social media dependency is a new element for Bitcoin when compared to 2017 but perhaps could be gone with the next uptrend rally in perhaps the year 2025.

The list of investors holding Bitcoin seems to be much larger now than ever before. Institutional investors, billionaires, and billionaire firms are not shy to invest billions in Bitcoin and Ethereum.

Although the price volatility and price patterns around the Bitcoin halvings seem to be the same, the focus of the market on Bitcoin and Ethereum from big names in the industry seems to be changing Bitcoin and Ethereum slowly but surely from a speculative asset to a true store of value, albeit one with large price swings.

The current trend seems to have reached a critical moment for either an uptrend continuation or an end of the trend consolidation zone. For the uptrend to emerge as the winner, price action will need to break above the 21 ema zone on the weekly chart.