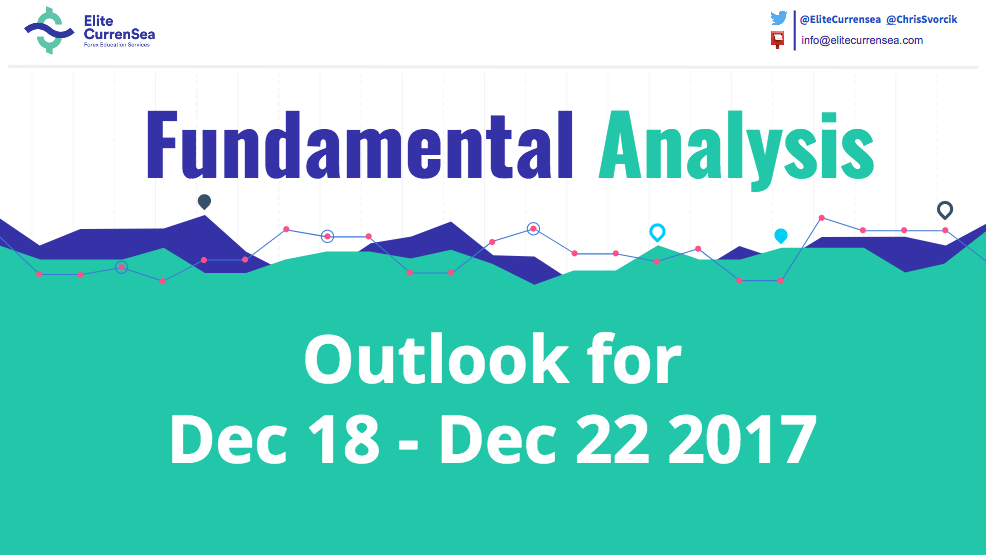 the final trading week before Christmas is here.

Who will be the winners and losers towards year’s end?

It was a strange last week for the USD, which sold off hard at first, in spite of positive data and a hawkish FOMC statement and forecast, only to then recover fairly well at the end of the week. US data is looking strong, and there is technical scope for the greenback to gain ground again against the 3 majors (GBP,JPY and EUR). The progress on tax reform is looking more positive again, and the bill could be passed as early as Tuesday. All this suggests that a strong week may be ahead for the USD. But it is important to remember that the price action of the 3 majors is not clear at this point, so there is potential for the USD turn bad as well. My bias however remains slightly in favor of USD strength.

EUR: The Most Resilient Perhaps

Although the ECB upgraded the economic growth forecasts substantially, the EUR sold off after the press conference last week. A potential reason for this could have been ongoing concerns with low inflation that were voiced by Mr. Draghi. In spite of this, the EUR still looks to be the currency that has the most potential to rise against the USD, or at least keep its losses limited. Economic data should continue to come in strong for the time being. German IFO report is the most significant data release in the week ahead.

The Pound was pushed around last week due to a mix of headlines and economic data. Although inflation, retail sales and wage growth reports were positive, Theresa May had a setback regarding her ability to negotiate a Brexit deal freely, without requiring approval of lawmakers. The BoE failed to acknowledge the positive economic reports, and although it did not lead to an immediate sell-off, the Bears certainly took over on Friday and drove the Cable strongly lower. Technically the GBP/USD chart is still quite a mess, but my bias remains that it may have topped out already on December 1st and that it is looking downhill for the Pound for the foreseeable future. The GBP/JPY is indicating a similar picture.

The strong AUD rally stopped and corrected at the end of last week. With no important AU data releases this week (aside from the RBA minutes), the direction of for the currency is unclear in the week ahead because resistance is in the way of further gains. The overall picture has brightened somewhat for the AUD due to the ongoing positive employment reports, which could translate into improvements in other areas of the economy in the near future. The relief rally of last week was very powerful and although I still believe that the AUD/USD remains in a longer-term downtrend, the upward correction could expand and a push toward 0.78 is possible given the powerful momentum we have seen last week. However my bias for at least the earlier part of the week is that AUD will be correcting and stay contained below 0.7725.

The NZD behaved very similarly to the AUD. A fundamental reason for the NZD rally could have been the selection of the new RBNZ governor Adrian Orr, but a more likely reason may have been a simple ‘short-squeeze’. The NZD still stands very much on shaky economic ground compared to the USD or AUD. The NZD relief rally should therefore be less powerful compared to the AUD/USD. An important difference between the two pairs is that the NZD/USD already broke through many important supports on its way down over the last few weeks, whereas the AUD/USD still has several long-term support levels in place. The structure of the NZD/USD rally also looks more corrective in nature compared to the AUD. It would therefore not surprise me to see the NZD rally fizzle out sooner than later. The week ahead has numerous semi-important data releases scheduled, including ANZ business confidence, Dairy Auction prices, trade balance, and GDP. If they surprise to the upside, further short-covering could be expected, but my bias is that gains should be capped at 0.71

CAD: Up and Down…

The CAD had a wild ride last week. Governor Poloz speech (sorry I forgot about that event in my previous post!) gave the market renewed hope that more rate hikes could be back on the menu in 2018. But the CAD gains were fully reversed on Friday when progress on US tax reform turned things around for the USD. This puts the pair in a technically strong position to break out of its range very soon and 1.30 is within reach this week.

But inflation, retail sales and GDP reports are scheduled for release late this week, which are expected to come in strong in general, and this could see the USD/CAD gains be limited to 1.30 -1.31 and initiate a deeper correction down again, which would be in line with my technical analysis for the USD/CAD, which is available here.

JPY: Weak, but there are Whispers in the Dark

The JPY remains stuck in correction against the USD and EUR. The BoJ rate decision and press conference is due on Thursday. Although no hawkish decisions are expected, there are rumors circulating that the BoJ may be considering the pros and cons of raising its yield targets or slowing down asset purchases (QE). If this is true, it could cause a significant bullish reaction for the JPY because it would be the first time in a very long time that such notions are even considered. So it is worth being mindful of this news event.