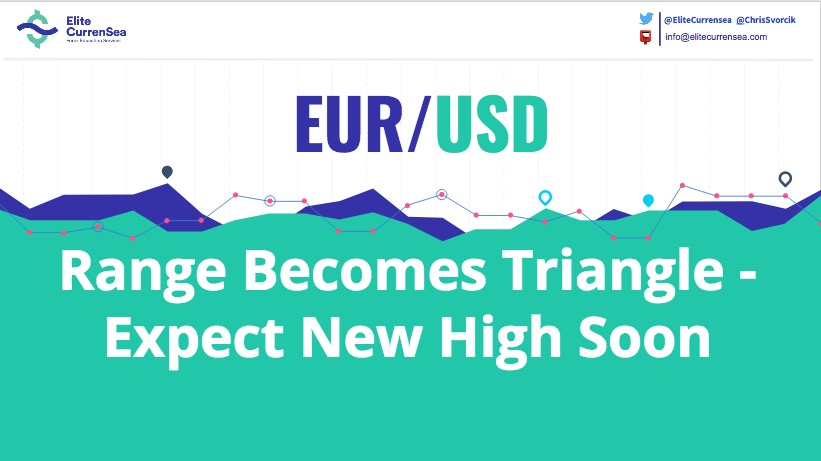 The EUR/USD range seems to be finally revealing more of its secrets. USD will make a strong comeback, but most likely not before having to concede another high against the EUR.

This analysis will review and update the medium- and short-term EUR/USD wave structure and highlight potential trade setups.

A Reshuffle of Wave Degrees Clarifies the Picture

The main uncertainty within the EUR/USD structure has been whether or not Wave 5 of Minute degree (white labels) finished at the February high of 1.2550. Price-action was erratic since then. Bears have been unable to make a good case for a reversal so far. The large size of the correction since the January and February highs does not make sense if it gets attributed to Subminuette degree wave (iv) (turquoise labels). It distorts wave size relationships too much. However if we shunt the wave degrees one swing back, the picture looks a lot more comfortable and begins to make sense of several anomalies. The charts above show that wave size relationships become quite sound by labeling Minute wave iiiº (white) as the February top and bringing Minuette wave (iv) (purple) down to the November 2017 low. The subminuette structure of the move between Nov 2017 – Feb 2018 then becomes nicely proportional. In addition, it also provides a good explanation for the ranging price-action since the Feb high, which has morphed into an almost complete triangle. This would fit well into the position of Minute wave ivº (white), in terms of structure (trend-ending triangle) and its size in relation to Minute wave iº (white).

All internal waves of the entire swing since Jan 2017 fulfill Elliott wave rules to the best of my knowledge if the counts are applied as per these chart images.

Furthermore, this wave count correlates very well with the DXY chart, which should also complete a final triangle soon.

A Final High To Top It All Off

The implications are that a final high is on order after swing e of the triangle completes. This would mean another USD recovery, starting either today or tomorrow. creating a final bearish ABC swing to finish the correction since Feb 2018.

Buy opportunities exist once triangle wave e is confirmed and completed. A move back down to 1.23 to 1.2275 would makes sense for wave e, which should be followed by a bullish breakout into the new high. A complete zigzag structure and a bullish bounce at these price levels could act as potential entry signal.

We should see either an impulse or ending diagonal pushing into the new high but don’t expect idealised subwaves… given that it is the final motive wave before the completion of many degrees, we should not be surprised to see the subwaves look somewhat ‘weird’. Also be aware that an ending diagonal could form and therefore move via zigzags into the new high.

A likely target is 1.26 which, is a POC of the psychological round number resistance level and a multi-year bearish trend line. It would also fit the rule of thumb that the post-triangle thrust is often roughly as big as the opening of the triangle itself.