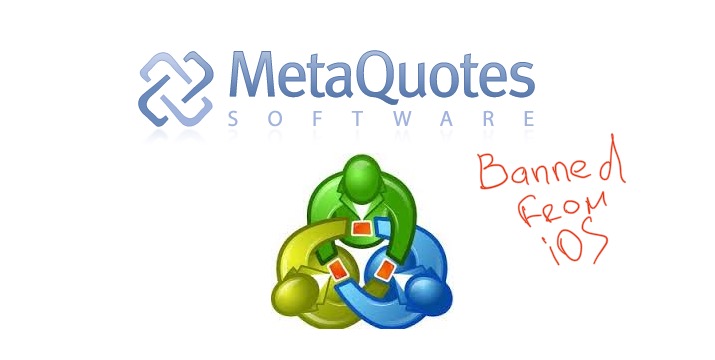 It has been reported that MetaQuotes MetaTrader 4 & MetaTrader 5 – the biggest retail forex trading platform has been just removed from an Apple iOS store in what seems to be a retaliation of US Government is an alleged help the CEO of MetaQuotes has engaged (not confirmed) in helping Russian oligarchs to move funds outside of Russia. Android users can still access the platform via mobile.

“We do not believe that Apple’s actions are linked in any way with the Western sanctions on Russia,” the MetaQuotes representative told Finance Magnates.

The representative, however, noted that the removal of the trading apps from the App Store has caused significant losses to the company.

“The removal of the Apps does not only affect the parties involved but also the industry as a whole,” the representative said.

MetaQuotes noted that it was liaising with Apple “in an effort to clarify the situation” and resolve the issue. The company further said it was considering other various options.

As per Finance Magnates Intelligence, MT4 and MT5 boasted a combined 78.7% share of the marketat the close of 2020.

However, we starting to see major US regulated brokers stopping to offer MT5 to their retail clients via their websites.

We will update this articles for more details related to MetaTrader exodus below. 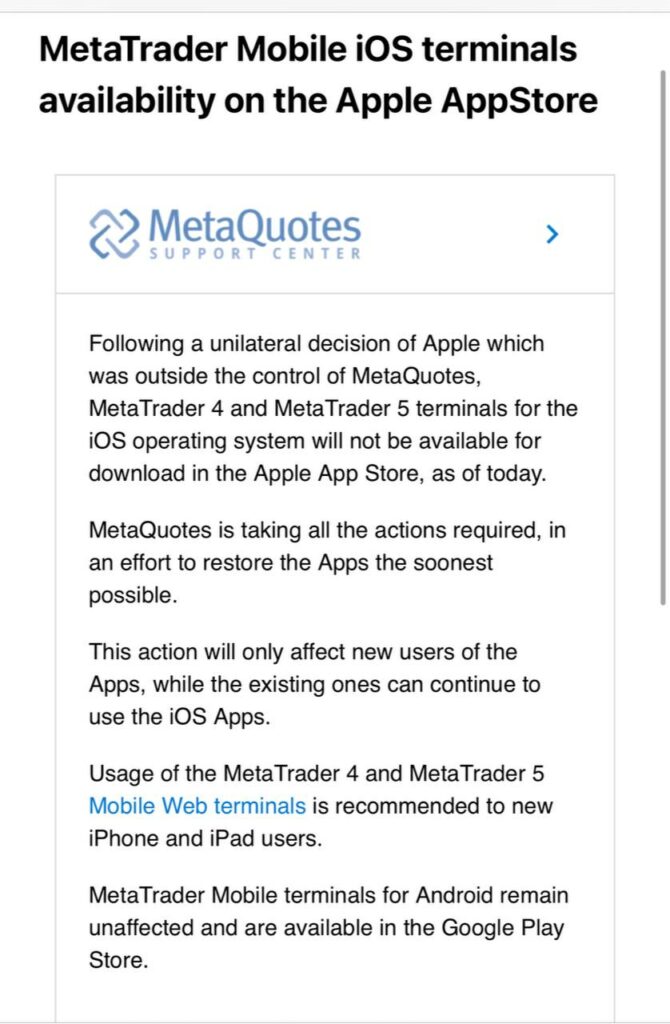 As the story unfolds after the MT4 and MT5 removals, MetaQuotes has reached out to the brokers with the following message. Besides, MetaQuotes sounding as surprised as all of us, nothing revealing or striking can be derived from the message.

In the meantime, a possible reason for removal could have been the recent scam broken by forbes.com on September 9th called “How One Man Lost $1 Million To A Crypto ‘Super Scam’ Called Pig Butchering”.

It is however unclear, how MetaQuotes was deemed responsible for action. A possible reason an app get removed from the App Store is for being flagged by users. If this has been the case however, MetaQuotes sure sound too surprised with the situation.

Alternatives to MT4/5 in Case of a Long-Term Ban

Despite it’s domination in the world of Forex & CFD, MetaTrader is not the only game in town, for alternatives, take a look at the following standalone trading platforms, as well as proprietary to broker solutions:

If only our mt4 indicators could work on these platforms because it takes years to build a perfect system. This is a sad day for us retail traders

It’s should be ok as far as all the desktop users are concerned at the moment, unless of course, the rumors about the US sanctions turn out to be true, which could lead to an outflow of true and capital out of the platform. We will keep you posted once our sources have anything new.