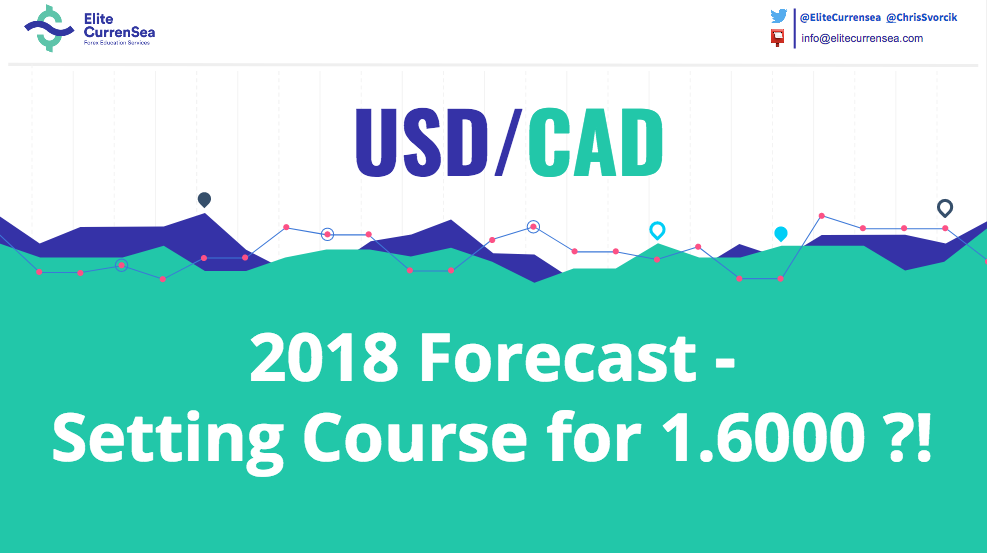 the USD/CAD experienced a sharp drop during 2017. But overall, the signs are pointing towards a promising bullish trend ahead for this currency pair.

This article will analyse the 2018 outlook for the USD/CAD  and highlight potential trade opportunities along the way.

USD/CAD is in Long-Term Uptrend

The USD/CAD monthly chart is a beautiful example of a very clean bullish trend that is unfolding according to an impulsive 5 wave pattern.

Price has been in an uptrend since 2011 (orange Wave 1) and reached a peak in January 2016 at around the 1.47 level (orange wave 3). This is confirmed by the momentum indicator at the bottom of the chart. The most common scenario ,after a climax in momentum, is a period of correction in the form of Wave 4, which consists broadly of a 3-wave movement (pink ABC). This, in turn, is commonly followed by another bullish push that breaks beyond the previous high of Wave 3.

The ABC correction within orange Wave 4 of the monthly chart is particularly clear and easy to spot. We have 2 sharp impulsive moves as pink wave A and C, plus a choppy corrective wave B in between the two bearish impulses.

This is text-book Elliot Wave theory in action. The strong bullish bounce at the 50% Fibonacci retracement level is a further indicator that the bearish correction could be over.

Surprise Rate Hikes behind the Bearish Move of 2017


The USD/CAD plummeted for several months between May and September 2017. The primary fundamental reason behind this was the Bank of Canada’s (BoC) hawkishness, which surprised the market. After consistently improving economic data, the BoC was one of the first central banks to join the US Federal Reserve Bank in raising interest rates again since 2010. It therefore was ahead of most other central banks in its attempt to begin monetary normalization after the crisis of 2008, which created the strong CAD trends we have seen throughout the second half of 2017. The BoC surprised investors again when it raised interest rates for the second time in September 2017.

However September was also a certain turning point for the USD, where some signs of life came back into it after being sold off heavily up until then. This, coupled with a change in tone of the BoC, which implied that further rate hikes were not on the menu for the time being, initiated the price recovery in the USD/CAD.

The US Fed is now on course to spearhead further monetary normalization measures during 2018, which could cause a new deviation between BoC and Fed policies and provide fuel for a renewed USD/CAD rally, which the price action and technicals seem to imply.


We have so far established that the larger monthly price structure still looks to be in uptrend and the fact that USD/CAD has been unable to break any lower for over 3 months is another important sign that a bullish reversal may indeed be taking place.

The last few trading weeks are also relevant indicators in this regard. The weekly chart (below) shows that price has been consolidating around the 21 and 144 EMAs. The last two weekly candles managed to produce bullish closes above these moving averages, which is another good sign that the price could be about to gain more bullish momentum again.

A similar break above the moving average can be seen on the daily chart (below). Especially last Friday’s strong bullish candle is indicative that the USD/CAD may be about to break out of its range. Two alternative wave counts are provided on the daily chart.

It would not surprise me if price were to hit at least 1.30 before the end of December 2017 still. But if the purple wave count of the daily chart is correct (i.e. that all the price action since September 2017 is still part of orange Wave 1), we should see another deeper retracement after hitting this new high, which would equate to a larger Wave 2. In this scenario, price may fall back down to 1.24 or even lower, but it should not break the September low of 1.206. (A break below this level would invalidate the entire bullish forecast)

This is my favoured scenario at this time and it means that USD/CAD could still experience bearish pressure during the earlier part of 2018, before gaining very strong bullish momentum during mid to late 2018.

The ultimate target for this large uptrend continuation scenario could be as high as 1.60 (-27.2% Fibonacci target of monthly chart wave 3), but price is unlikely to reach these levels during 2018 already. Instead i would imagine that a retest of the 2016 high at around 1.47 is more realistic, with 1.60 perhaps being reached during late 2019/ early 2020.

Aggressive traders who like to enter intra-month swing trades could already consider long positions in the coming week. It would be aggressive because price has not broken out its range yet, but the bullish candles of the last two weeks suggest that a break is imminent.  Waiting for a retracement to the 21 EMA of the 1-hour or 4-hour chart should provide better entry levels,  with stops around 1.27 and targets of 1.30 and 1.31.

Further entries should appear once price beaks above the range that should allow for much tighter stops to be set. But as previously discussed, a correction lower is still likely even if price reaches the targets of 1.30 and 1.31. Therefore I would not recommend holding on to long-term positions until the anticipated bearish retracement during early 2018 shows signs of being finished. After this point, the way upwards towards 1.35, 1.37, 1.40 and 1.47 and should be a lot clearer and faster.

Overall it would appear that the stage is set for a renewed USD rally against the Canadian dollar in the year ahead, which could provide lucrative trade opportunities for long-term, medium-term and short-term traders a like.

Weekly Waves 9 May: EUR/USD, Bitcoin and US30

May Monthly Wave Analysis on EUR/USD