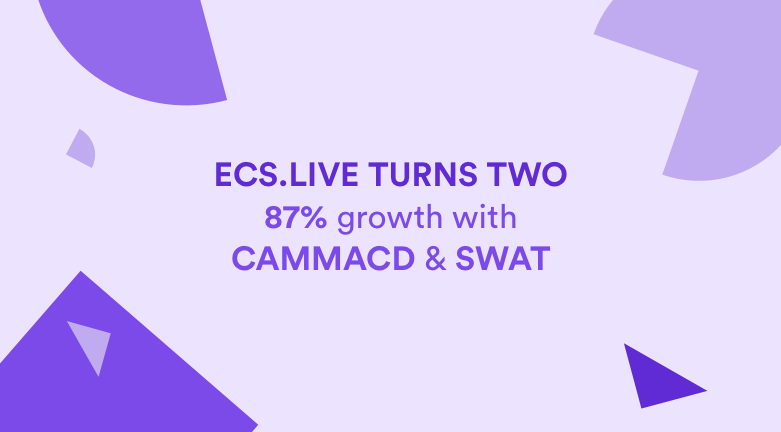 We have completed a 2nd year with our live trading and signals service (ecs.LIVE). Although the performance was less spectacular than during the 1st year, our clients have seen another decent profitable year.

Let’s delve into the the ecs.LIVE results in more detail by examining the performance of ecs.SWAT and ecs.CAMMACD trading methods one by one.

Here are the most significant stats from our trading signals: 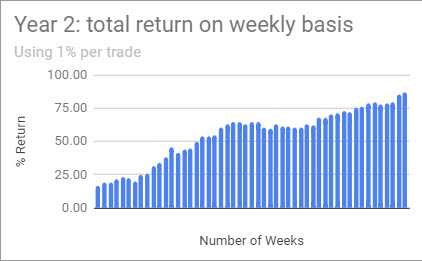 We also measure the performance over 4 week intervals in the 2nd year (13 periods in total):

Here are the key averages in year 2:

Of the 52 trading weeks in year 2, these were the results week by week:

Almost 8 out of every 10 weeks was either positive or break even.

Besides our ecs.LIVE stats, we also trade the trades on a real, live account. The performance has even been better than the official stats because our account is up +374.5%. We managed to book a profit in only 10 months.

The live account started with $10,000 and has reached a peak of almost $52,000. We managed to make a profit on our own account than with ecs.LIVE because we are more risk tolerant ourselves but do not want to take as much risk in the ecsLIVE channel.

The ecs.SWAT method has some substantial wins in year 2. Although the traditional SWAT method only restarted again from mid June 2019, there were many spectacular wins in these 4.5 months with 13 (!) wins with +100 pips profit or more.

The best trade, however, is undoubtedly the GBP/NZD win with almost+300 pips profit with a reward to risk ratio of almost 3.5:1, which means that the profit was almost 3.5x as large as the stop loss size.

Here are the trades which closed above +100 pips in the past 4.5 months:

The ecs.CAMMACD trading method has a different style with smaller wins on average but with a higher win percentage than ecs.SWAT. CAMMACD managed to close with a 65% win rate over the entire year.

Also the new CAMMACD system on the 15 minute chart created a spectacular win in October 2019 with +115 pips and 2.3 r:r ratio. More impressive wins have emerged over the last few weeks since its start.

This is why we recently introduced a new way of calculating our performance in the short-term: it is a running average of the last 16 weeks only.

This will give traders an idea about our performance in both the short-term and long-term.

Year 2 has also seen us move away from using a standard 1% risk per trade. Both the ecs.CAMMACD and ecs.SWAT methods are using variable risk per setup, which is why we started measuring both our return and the total reward to risk (r:r) return.

The difference between our return and the total r:r? The r:r indicates how much could be made when using 1% risk per setup whereas our return is the profits we made with the risk we used (often we risk less).

We started to measure both figures 5 weeks ago and we recalculate the average each week. Both figures indicate the total over the past 16 weeks and also the monthly average.

The ECS profits made and used for the year 2 stats are lower because we used less risk. So although ECS earned +87% in year 2, other traders might be able to earn more if they used more risk. Our return:

These numbers will change each week because it works like a moving average. In the past 5 weeks, these levels have the low and the high so far:

So far, the average performance has fluctuated between these two figures.

Here are the most significant stats for both years:

Here are the key averages since the start:

Of the 52 trading weeks in year 2, these were the results week by week: 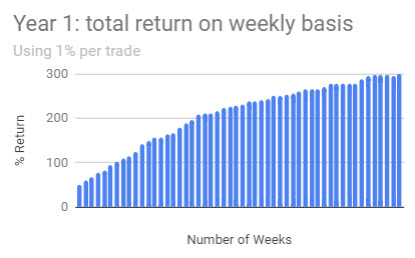 Why was the 1st year so much better?

First of all, volatility was quite low during large parts of the 2nd trading year with ecs.LIVE. This substantially impacted the number of pips we were able to capture.

Second of all, we were taking less risks in year 2 on many of the setups. In year 1 we always took 1% risk per setup. In year 2, many trades were taken with less than 1% risk per trade.

Third of all, the usual ecs.SWAT swing trading on the 4 hour chart was paused for a while. We resumed with classical SWAT in mid June 2019.

Fourthly, performance fluctuation is normal and expected, especially when taking into account such high levels of return

That said, we still think that almost 100% profit in 1 year is a good result. But of course, we hope for better results in year 3.

Extra Bonus for Joining in November

To mark our 3rd year, we are providing a bonus to all traders – new, old, or current – to subscribe, rejoin or prolong your ecs.LIVE subscription with ecs.LIVE during November 2019.

More information about these indicators:

Once again, this is only valid for those that join in NOVEMBER 2019.