cammacd.MTF Version 4.1 is Completed and Live 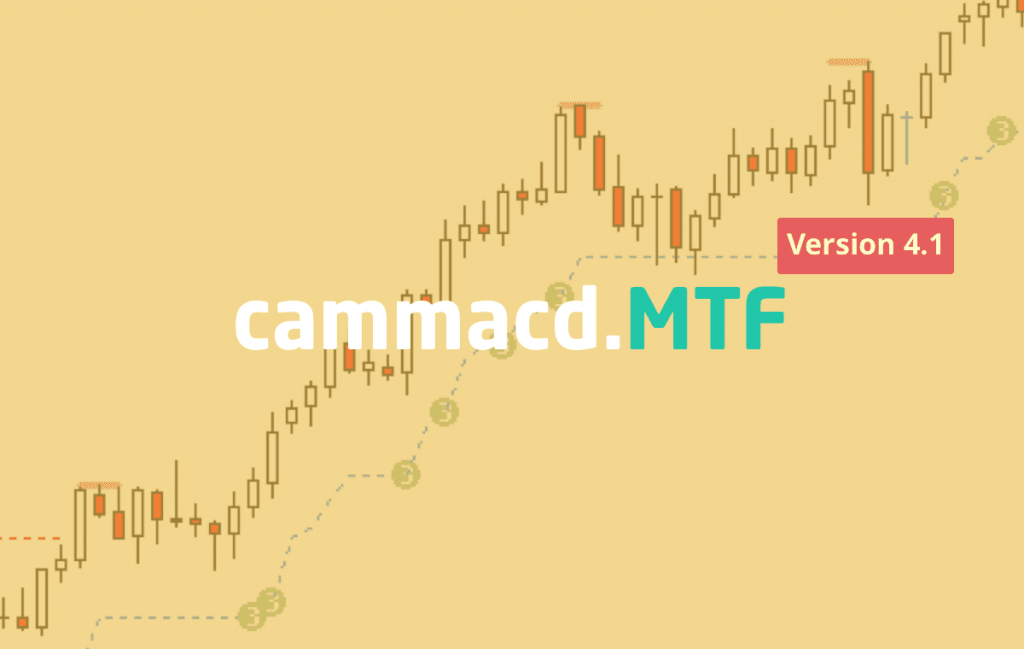 Welcome to the significant CAMMACD update! Exciting times have arrived as all CAMMACD traders can enjoy the newest MTF 4.1 version. This will be the last update for a while as the cammacd.MTF has fully reached its pinnacle.

After 240h of thorough backtesting, we added many new and exciting features and removed all bugs. With the help of our friend and trader Mr.Carlos Cordero, the new ecs.Oscillator has been coded and many new features have been added.


What is CAMMACD.MTF All About

In trading, we always want to buy low and sell high. With the ecs.Oscillator and ecs.MACD indicators it has never been better, even in these hard market conditions. When we define the zone, we just need to wait for the signal and the rules to align and pull the trigger.

How? It is easily explained in the cammacd.MTF course and the video. The CAMMACD is entirely suitable for Intraday and Momentum traders. Around 240h have been invested into the ecs.Oscillator and Arrows indicators coding along with the new dashboard. Most traders are just confused and lost in the ‘noise’, but CAMMACD removes that confusion (‘noise’) and offers a clear plan and signals. In fact, we are not the only ones… Many of the big institutional traders also purchased CAMMACD from us.

We recommend the CAMMACD for every type of trader – regardless of style, time frame, approach or system you are using now. With this method, your plan will be apparent, consistent, and duplicable.

Now that cammacd.MTF is fully up-to-date, my next goal is setup CAMMACD counter trend trading module that will use the ecs.Oscillator for sure!

Why the Update If It’s So Good?

The market changes all the time, so we must change with the market. The movement and behaviour of financial instruments, including currency pairs, depend primarily on the macro environment at the time.

The players involved keep changing their behaviour according to the broader economic climate. Whether a currency pair is reacting to a news release, a technical level, or manipulation, the nature and severity of its price reaction depends on many things, such as inflationary cycles, bull/bear market conditions in equities, and global macro themes. Because of that, a lot of perfectly fine technical trading systems suddenly stopped working, and their creators probably still don’t know why.
Simply put, markets are much different in 2019 than they were a few years ago. The ATR is much lower meaning that the markets are less volatile, and there is a lack of momentum. For almost all pairs the ATR has been halved. For example, the GBP/JPY is currently at 70 pips. ‘It’s nearly 50 % down from the usual GBP/JPY volatility.

It means that the market is not giving us as many pips as a year or two ago. We need to adapt to current market conditions that are usually in the form of ranging consolidation-breakout.  So if the market is willing to provide 70 pips from top to bottom, we should be happy if we take 30 pips in a single trade. With the cammacd.MTF update, we solved a piece of the problem.

We accept only trades that have been confirmed by multiple filtering. We also added a super-dot entry that allows us to go with more significant risk due to extreme accuracy. At this point, the MTF is suitable for both low volatile and highly volatile markets.

Momentum and the ATR

We traders usually say that the price frequently lies, but momentum generally speaks the truth. The faster the price increase, the higher the increase in momentum. The quicker the price decrease, the more substantial decline in momentum. For me, momentum is significant as it tends to propel the price directly in profits, provided that we have picked a clear and accurate entry. If the entry is bad, your position might be in a loss.

However, the worst trades are made when the market is stuck in a range, and it only goes nowhere. Novice traders are usually caught in those rangy market moves, and they tend to quickly revenge their trades, thinking that the market changes the direction when it stays effective in the range.
In terms of intraday trading, this can be devastating. The lack of patience, especially for new traders, is a sure sign to lose money. The good news is that you can avoid that.

For intraday trading, we need to pick up markets with good momentum and big ATR. Unfortunately, markets in 2019 are much harder to trade due to the lack of momentum and low ATR.

The ATR value is crucial to a trader as volatility increases, so will a charts ATR value. If volatility declines, and the difference between the markets’ highs and lows decreases, the ATR will drop, too. We have our ecs.ATR indicator (article) that is one of the best tools for intraday trading and you can buy it in our ECS shop.

(The ATR  is a volatility indicator developed by J. Welles Wilder. The primary function of the ATR indicator is to gauge the distance between the previous highs and lows, for a given number of periods. The ATR is displayed with a decimal to indicate the number of pips between the highs and lows. But it can also be shown as digits… as I use it for our webinars and analyses.)

A Super-Dot happens when the algorithm in our system detects a few variables that are confirmed by ecs.MACD and ecs.Oscillator. The code is running in the background, and traders see the signal as it is shown in a few examples below.

Because the Super-Dots are strong signals, we do it with a slightly higher risk per trade (2-3%).

I fully trust CAMMACD as I have created it, and I also trade it. You can always check our performance via myfxbook. But again, it’s much harder than it was a few years ago. With the MTF 4.1, I definitely have high hopes for the bright future of FX trading.