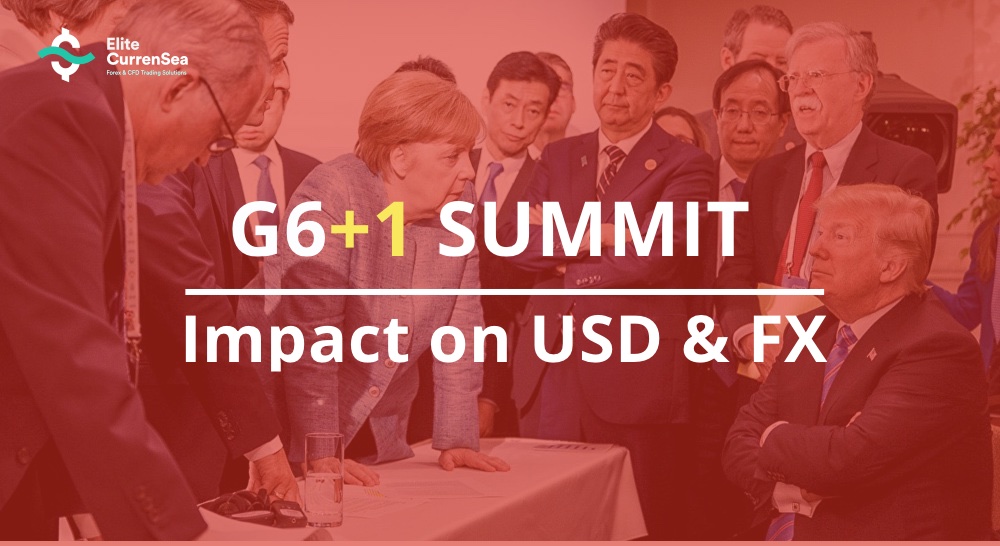 The current US President, Donald J. Trump, is breaking away from a western alliance that some argue has lasted 75 years.

Traders and investors are wondering whether this will bolster or weaken the US Dollar (USD) and how will it impact the Forex market?

This article reviews how the current US foreign policy will impact the USD during the upcoming months and years.


US Created System of Imports and Globalization under US Threat

The current US policy towards export-import and globalization is well established, long-term, and bipartisan approach that has spanned previous decades. This trend accelerated in 1971 during the Nixon shock.

Ex-US president Richard Nixon (reluctantly) removed the US Dollar peg to Gold in 1971 (called the Nixon shock), thereby removing any hope for saving the Bretton Woods agreement in 1944.

The US started as a major exporter after World War II but during the 1950s and 60s become a heavy importer. It was the high imports that were taking its toll on the exchange rate system. Why?

Other export nations kept exchanging their US Dollars for Gold in the US, which placed a large demand on US owned Gold. Ultimately this meant that the US had two choices:

Nixon choose the latter, after some significant hesitation, and exited the Bretton Woods international monetary agreement from 1944. The new world of floating currency exchanges amplified the US as an import country.

In fact, the US fully embraced its role as an importer. It was able to sustain this due to credit and debt, which in a way some economists argue was bought by exporting countries who had surplus cash from their exports. The export nations bought US Dollar and US securities such as stocks and bonds.

The demand for financial products from the US also helped fuel the financialization of the US economy, moving it away from industries. Access cash from exporting countries returned back to US money markets, which helped avoid overheated local markets and inflation in their local markets. Germany for instance has kept inflation under control despite high export levels.

The demand for the sophisticated and secure US money markets plus its major and global geopolitical power and position helped stop the weakening of the USD currency and allowed it to sustain this module for multiple decades.

If we also consider the US-Saudi alliance and their decision to have oil denominated in USD, then the reason for the USD dominance seems complete, despite its high levels of imports and debts.

This is a module or luxury that other countries with high imports/debts were not able to replicate and is unique for the US itself due to the demand for the USD. Other nations would often run into trouble from the financial markets.

Most of the world seemed satisfied with the deal where US buys products from the world and the world sends its profits back to the US money markets.

There was just one loser in the equation that unbalanced this equilibrium: the US voter.

The segment that was losing out over the last decades seems to be the average US citizen. Especially the employees who did not invest in or own stocks and were dependant on their wages for income. Why?

The productivity gains soared but the biggest benefactors were firms, not the employees. Research shows that these productivity gains were mainly captured by corporations. Employees managed to retain a similar lifestyle mainly due to an increase of debt, not salary increases, which seems to have created a frustration in a large segment of the US voters because debt levels have reached high levels.

As an extra barrier, the US political system seems clogged due to its limited restrictions in political campaigning, a restrictive 2 party system, and relatively a high impact on political choices from lobbyists.

The frustration from the US voter took revenge on the political elite and the people who benefited most from the stock market gains.

The voters were probably also still struggling to fully recover from the the debt crisis (in the housing market) that caused the Great Recession in 2008. The problems were masked and solved by the Federal Reserve in the US via a very accommodative monetary policy called Quantitative Easing (QE). It stopped the financial crises from spiraling into a depression and fuelled the stock market again. But the structure remains unchanged: voters face lower purchasing power and mountains of debt.

Trump capitalized on this dissatisfaction and gained political support for a change of the status quo. His tough words at time on this allies in Canada and in the EU at the G7 meeting on Saturday 9 June is intended to show his voter base that he is following-up on his campaign promises to tackle the challenges caused by globalization. Trump’s policies and views are opposite of the the US’ policies of the past decades, so it remains if he can and will seriously change the long-term policies of the US.

A limited one term presidency is not likely to really change the foreign policy of the US position, nor its alliance with the EU and NATO. But dynamics might change if he wins a second term and/or more future US presidential candidates embrace the policies of ‘Trumpism’.

At this moment the Republican party does not seem convinced of Trump’s new found annoyance with trade, globalization, and its long-term allies. Republic Senator John McCain made an announcement via twitter:

To our allies: bipartisan majorities of Americans remain pro-free trade, pro-globalization & supportive of alliances based on 70 years of shared values. Americans stand with you, even if our president doesn’t.

But Trump is probably appealing to his voter group, not the Republicans. Time will tell who his new strategy will appeal to the voters in the midterm elections of 2018 and the US presidential elections in 2020.

At this moment, Trump’s words and actions are probably more provocative than a serious change of long-term US policy. But in the long-run you cannot rule out how the dynamics change depending on the election outcomes in 2018 and 2020 in the US.

USD Dominant but For How Long?

Russia and China probably would not mind if the world is less dependant on the US Dollar. How much impact they try to undermine the USD, if at all, remains an open debate but it would not be a stretch of the imagination if these countries rebalance their currency portfolios away from the US Dollar. In the long run, this could reduce demand for the USD.

That said, the current US led globzalition module is probably still intact, despite Trump’s words and actions till now. With interest rates on the rise in the US, demand for the USD will not suddenly dry up.

This is especially true when considering that the secure and safe money markets in the US and the fact that the US economy is growing much faster than in the EU. The economy in the EU is still dealing with long-term structural issues and its currency has internal problems of its own.

Both the EU and the US have major debt problems and its difficult to assess which one is worse. But in our view, the US might struggle even more so with its debt, especially when considering how much debt is again added under Trump’s new fiscal policy in the upcoming years.

If geopolitical tensions increase, then this is usually good for the US Dollar as risk off sentiment pushes investors and traders to the greenback. In that sense, a lengthy irritations between the US and EU favor a stronger USD.

All in all, higher debt levels in the US, any economic struggles that could prompt the FED to loosen monetary policy, and any serious trade wars could hit the US equally hard. Balancing all of the above factors is not simple but in the long-run, based on wave patterns, we are expecting USD strength in next 1-1.5 years down to 1.10-1.12 on EUR/USD and then eventually USD weakness from +/- mid 2019 where EUR/USD can move up to 1.30-1.40. Any strong bearish price action below 1.10 would seriously challenge this vision and we would reanalyze the expected wave patterns at that time.