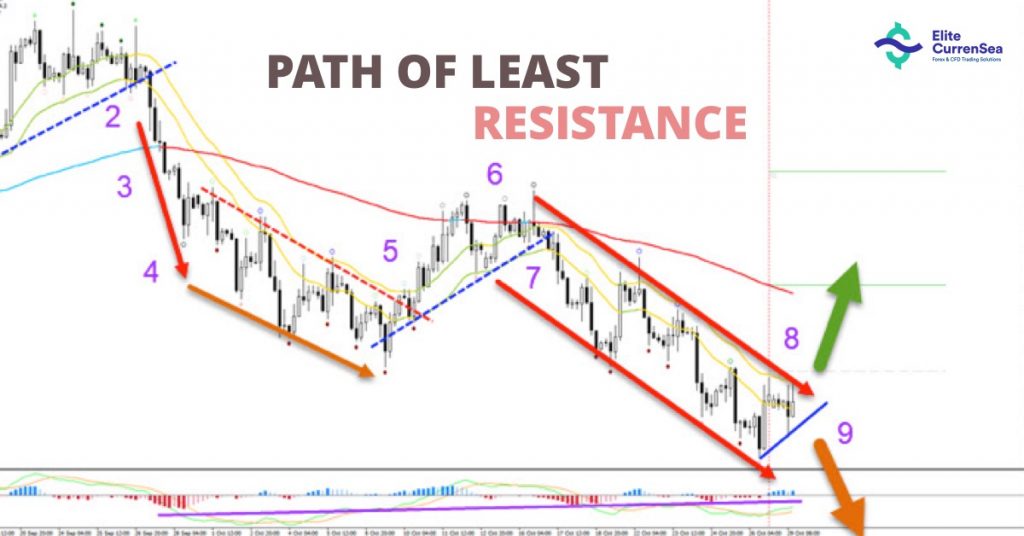 Did you ever wonder why the Forex and CFD markets move so much on a daily basis? Although the long-term price movements are determined by large fundamental factors, the short-term is much more dependent on historical price movements that are visible on the chart.

What on Earth is the “Path of Least Resistance” or “Market Map”?

Traders use a wide range of techniques to understand the price chart and find profitable entry points, ranging from technical analysis to wave analysis and from price action and candlestick patterns to indicators. All of these methods are based on “historical price”.

Nenad, Chris, and technical traders in general analyse these price charts with historical price to study how price moved in the past, which in turn, offers information about how it will move in the (near) future.

This technique is not only used in Forex and CFD trading but is equally valid for a wide range of topics such as weather, geology shifts (movements of continents), changes in the universe (change in planets, stars and universes), climate change, consumer patterns and much more.. Historical data is also used for instance to understand, improve and forecast traffic jams, political changes, economic trends and a whole range of fields. Historical data is always a key component of any analysis.

Why do we emphasize the “immediate” future? Because forecasts are most reliable in the short-term and become more difficult when applied to the more distant future.

The reason is simple: the further we look into the future, the more difficult it becomes to analyse all aspects – including current, hidden, and unknown factors – because there are more variables along the way that can impact the potential path.

Simply said, the path of the future can run in many different directions and it is much easier make a forecast when analysing events close to now. This is also valid for the markets and the charts.

Let us take a look at an example such as the weather. Most people believe that meteorologists are bad at predicting the weather but studies show that nowadays the weather can actually be predicted with great accuracy (see Superforecasting: the Art and Science of Prediction” by Philip E. Tetlock and Dan Gardner.)

Although the weather forecasting is not seen as a field of study with high levels of accuracy, it is in fact surprisingly correct. In most cases when the weather team indicate that there is a 30% chance of rain, then three out of ten times it will rain and seven times it will not.

There is just one limit and one exception (see Superforecasting: the Art and Science of Prediction” by Philip E. Tetlock and Dan Gardner.):

Although probability is an important aspect in life when taking all kind of decisions, humans unfortunately tend to be weak when trying to understand probability. A 30% chance of rain does not mean that there is no chance of rain or that rain is unlikely. It just means that out of 10 days, it will rain 3 times. But in the mind of most people, a 30% rain chance is almost equal to 5 or 0%. For most people, there is probably not much difference when the weatherman says that there is 5 or 30% chance.

Another way of understanding price and the path of least resistance is by comparing it to a stream of water like a river running down the hill. The water will find its path to a larger river or to a lake by choosing its path of least resistance around bigger rocks and setting aside smaller rocks. Price of course does not make a left, right or straight motion but an up, down or sideways but otherwise it is comparable to a river. 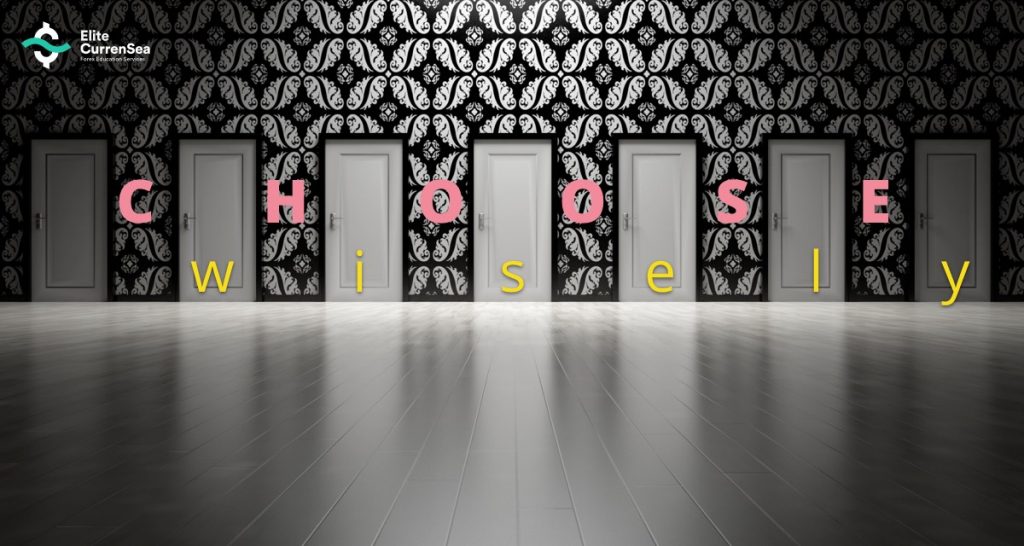 The Dynamics of Flow vs Resistance

This means that traders can assess each situation on the chart and then determine the probability that price will continue higher, lower or sideways by analysing the flow and resistance.

What is flow and resistance for price charts? Let’s explain:

The decisive factor is whether the flow or the resistance is stronger. This will determine whether price will move with the trend or reverse and whether it will move up, down or sideways.

For more information about analysing support and resistance, check out our ultimate guide for analysing and understanding S&R.

Let’s again examine a river (or creek) to simplify the concept: at points with resistance, the water will move around or away from the object. When the power of the water flow picks up, it will be easier for the water stream to push aside stronger points of resistance.

The most important factor is compare flow versus resistance:

The same principle that is used for a river (flow versus rocks) can be used for price. With price charts, the flow and resistance can be understood by analysing these two aspects:

Like with a river, the interaction between flow and resistance determines the path of least resistance for the object, which is a river or price:

Let us take a look at a practical example – see the image above. Starting from left to right:

Now you too know the magic of the MARKET MAP!

The above logic might seem complex to you at first but we explain the entire approach step by step in our ecs.SWAT course.

The most important aspect to understand is that:

Join our World of Trading by starting with ecs.SWAT or ecs.LIVE !