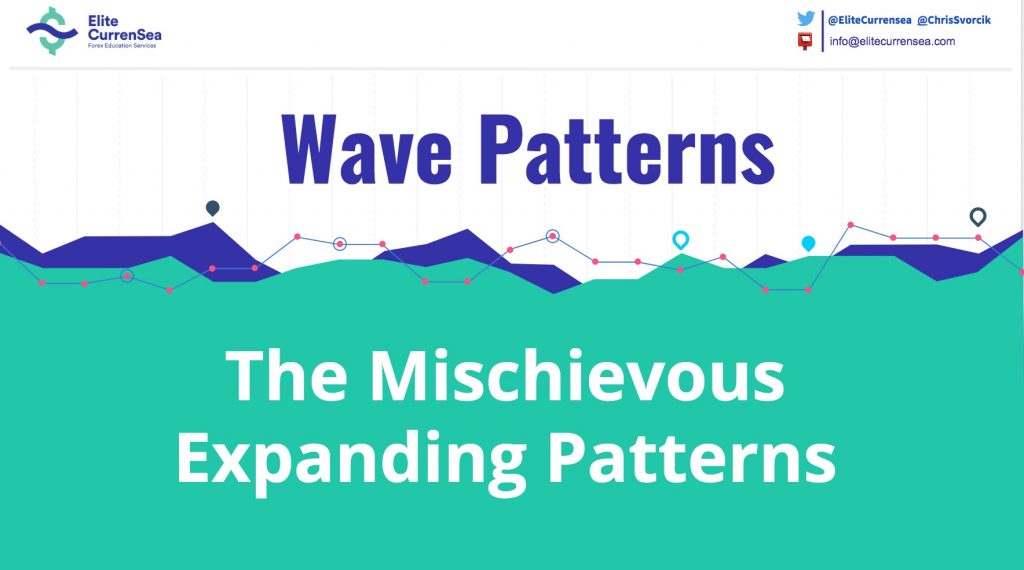 Wave patterns aren’t everyone’s cup of tea, but there are two special patterns that every trader would benefit from being aware of… the mischievous expanding flat and expanding diagonal. They can wreak havoc with ones trading ideas and leave a bitter after-taste if one gets caught in them unaware.

This article will discuss the nature of these two wave patterns and how to detect them early.

Expanding wave patterns are unique in their ability to break previous highs and lows while failing to produce continuation in any direction until the structure is complete. This can cause a great deal of confusion in one’s analysis, let alone book several losses. Expanding patterns can send you in the in the wrong direction more than once before, irritatingly, going in the direction you originally thought it would go. Let’s take a closer look at them…

An expanding flat is a corrective price structure, which subdivides into a 3-3-5 pattern. Its special feature is that the second swing (wave b) will overshoot (sometimes significantly) the high/low of the trend structure that preceded it. This makes it look like the trend is already continuing. However the third swing (wave c) of the expanding flat will reverse sharply and even break far beyond the start of the second swing. At that point the danger lies in believing that a reversal may have set it, especially because the final swing is very strong and impulsive. But the fact is that price will resume its original trend direction after the third swing. So this wave patterns sets two traps in both directions. If one got burned during these traps, this pattern can also lead one to abandon the whole setup idea shortly before it completes … just when price would be starting to resume the trend direction for real, creating a potentially third and final psychological blow, when we see the ‘train’ leave without us. Here are some examples:

The EUR/JPY 4-hour and daily charts above show an expanding flat (see white lines) in a wave 4 position of a large bull trend. Wave a of the expanding flat was a very sharp bearish zigzag. Price then made another 3-wave zigzag to the upside that broke the previous high of 136.65, before turning south again and creating a large impulse that went far beyond the start of wave a. The larger uptrend is now very likely resume again.

We can find another expanding flat example on a much smaller scale, nested within the same EUR/JPY chart. The image below shows a 15-minute chart close-up of the final impulsive swing of bearish wave c (purple). Here, again, we encounter a sharp expanding flat in a micro-wave 4 position (see white lines).

The next chart shows two expanding flat examples within the recent micro structure of the USD/JPY. In this case, they appear in wave 2 positions (see white lines) and are each followed by strong bullish continuation.

How to navigate Expanding Flats

The earliest point at which the danger of an expanding flat can possibly be detected is towards the end of wave b. This is the time when the high/low of the preceding trend wave has already been broken. But if price has only produced a 3-wave structure up to this point and begins to struggle to make further headway (i.e. many small candles in a row and many wicks in the trend direction), alarm bells should be starting to go off. The EUR/JPY 4-hour chart (top image) shows this dynamic. Normally we should see stronger momentum to the upside after a break of the previous high but, instead, the candles becomes very small soon after the high is broken.

In addition, one can check whether the trend wave structure still adheres to all its Elliott rules, because wave a and b of an expanding flat will start to create a ‘messiness’ that one cannot easily fit into trend continuation wave rules.

The second expanding flat example of the USDJPY chart (towards right-hand side) shows this. The 3-wave structures after the high of black wave 1 no longer makes sense for an immediate upside continuation, and thus one should be warned of more downside to come before trend resumes.

This is a 5-wave pattern that can appear at the very beginning or at the very end of larger trends. In addition it can also appear within zigzag corrections. Each of the 5 waves tends to subdivide most commonly into 3-wave structures themselves. It is related to the expanding flat in that it breaks previous highs and lows before resolving itself. If one is not careful, this pattern can send you in the wrong direction even more often than the expanding flat. Here are two examples:

The chart below shows how the GBP/AUD recently produced an expanding diagonal as a terminal wave 5 of an uptrend. It was a particularly ‘nasty’ one because wave 3 of the diagonal created an especially complex zig-zag, which made it difficult to gauge the end of the pattern even if one was aware of the diagonal potential.

The USD/JPY also produced an expanding diagonal in its final swing of its recent bearish trend (see chart below). Wave 5 of the diagonal was unusually short but it nevertheless fulfilled the rules for this pattern.

How to Navigate Expanding Diagonals

They tend to be a bit easier to spot than expanding flats due to several factors:

On the positive side though, expanding diagonals can become a very helpful guide for early detection of trend changes.

Knowing these two patterns can save you a lot of confusion and money potentially. If you want to exercise your ability to spot them, try finding them within past price-action of any chart and get a feeling for how they look.

All the best along you trading journey

How to Evaluate Forex Signal Providers?