How To Use Price Action Flows From The Chart 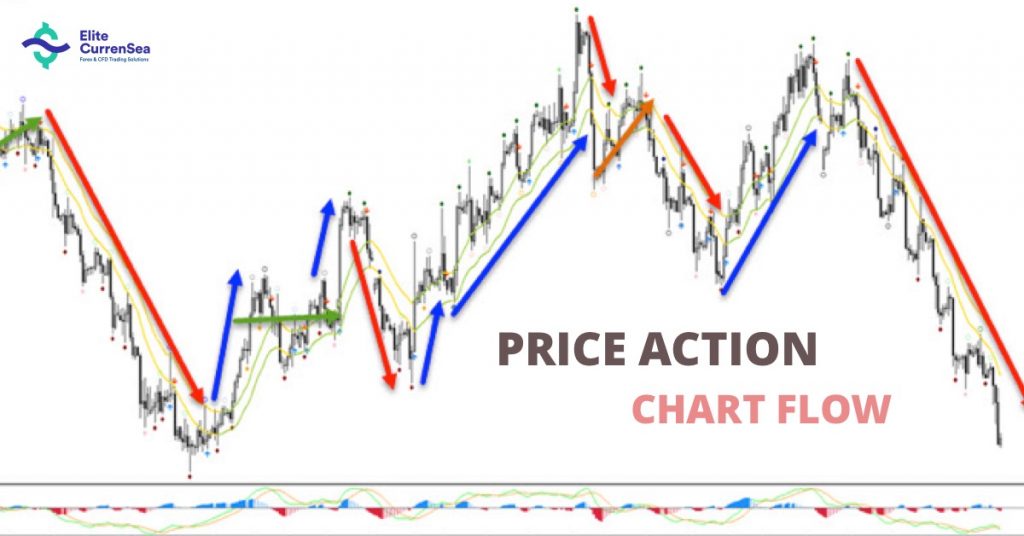 Correctly analysing price action flow is a key part of understanding the path of the least resistance. By knowing whether the price swing is behaving impulsively or correctively, traders can create a strong edge when reading the charts.

Simply said, both resistance and flow are in a constant battle and the outcome impacts the price path as follows:

Our “path of least resistance” articles examines this concept in fine detail. Today’s article, however, focuses on how to actually measure the flow of price action.

The resistance part has already been reviewed in detail via our Ultimate Guide on Support and Resistance (S&R). It provides a deep overview of how to determine S&R, what tools and indicators to use, how to use S&R and much more. Now it’s time to analyse the flow of price action.

The 4 Types of Price Action

It is important to know that strong price movement is called impulse or momentum whereas weak price action is known as corrective or consolidation. The strength or weakness of price flow can be understood by analysing whether price is behaving impulsively or correctively.

Both strong and weak price action can take place during bullish and bearish price movements, which is why they are sometimes divided into bullish and bearish price action movements. Simply said, impulse and corrections forex can be either bullish (price is moving up) or bearish (price is moving down). This creates four different types of price movements, which in some ways can been seen as “DNA” or heart beat of the market:

Each of these four variations represents a separate “price swing”, which is considered to be a group of candlesticks where the majority share common direction (bearish or bullish) and strength (strong or weak). Basically, every price swing is either bearish or bullish and either impulsive or corrective. (Price movement is also called price action, a price swing, swing, or swing high and swing low.)

You might be wondering: what is the benefit of knowing this information about the price swing? Traders that correctly analyse and understand price swings have the following advantages:

Based on above info, traders can make better decisions about their trades, such as skipping setups, managing open trades, and entering trade setups. Price swings are not the only factor for trading decisions, of course, but certainly play a key role in our own analysis.

Let’s examine what traders should consider as “impulsive” (strong) or “corrective” (weak) price action. Here is an an overview:

Impulsive price action is characterised by a couple of main factors:

Corrective price action is characterised by factors that are mostly the opposite of impulsive candles:

Impulse and correction are in a way the heartbeat of the market. Eventually impulsive price action will run out of steam, simply because nothing can move in one direction forever. The impulsive price action can however last for longer than you expect but the energy will eventually die down and candles will either become corrective and slow down in their movement or reverse into the opposite direction.

You can compare this to energy versus gravity. When you throw a ball into the air, it will keep pushing higher due to the momentum. Eventually, the ball will reach a peak in the air and slowly starts it decline towards the ground. Why? Momentum is not strong enough and the gravitational forces of the earth start to kick in. Momentum weakens and gravity starts to have an impact on the ball.

The same is true for price action:

At first momentum is stronger than gravity but eventually momentum weakness and gravity becomes stronger, thereby pulling price into a correction, which is either in the opposite direction (reversal) or sideways direction (consolidation).

P.S. Share our passion for trading and learn price action from our methods and techniques by: