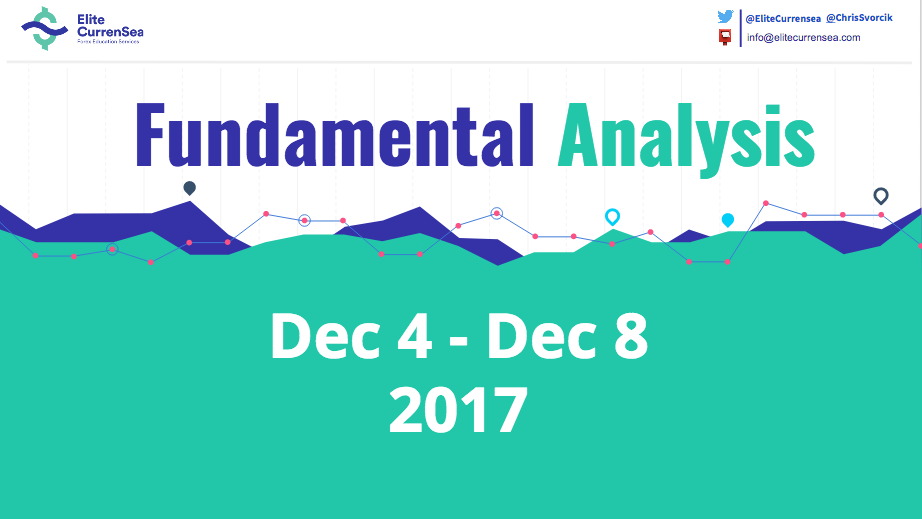 Following is my fundamental and sentiment analysis for the week ahead

The USD has been boosted by tax reform progress and battered by political scandals and it is still not clear which factor will have more impact on the currency. My bias is towards more USD losses earlier in the week before having the potential to gain more strength in the 2nd half of the week, when Jobs data could provide renewed optimism for the greenback.

The EUR has continued to bring out mostly positive data, but the German coalition problems are putting some uncertainty into the direction of the currency this week. It will mainly take its cues from the markets appetite for USD, but watch out for Mr Draghi’s speech later in th eweek.

Will continue to be governed by Brexit developments, which are going to come to a very important decision point within less than 2 weeks. This timeline coincides very well with the potential completion of the recent GBPUSD and GBPJPY uptrends. If technicals have anything to predict, we could see the beginning of a much larger GBP downtrend. So it is a very exciting time to monitor these 2 pairs closely. This week however still shows good potential for GBP to gain more ground, especially against JPY.

The AUD has a busy week ahead with lots of data and RBA rate announcement, but the RBA statement should have not too much impact on the currency because nothing is expected to change in their policy stance. It is more likely that Retails sales and GDP reports could provide more volatility. Overall AUD could still gain ground this week and AUD/USD is not expected to sell off further until at least later in the week.

Unlike the AUD, NZ keeps on pumping out one bad data release after the next, giving the RBNZ nothing to be optimistic about. Although it is in a similar corrective relief rally like the AUD/USD, the NZD is most likely going to show more signs of weakness compared to the AUD. Dairy auction prices and RBNZ’s Spencer speech will be the main events to watch out for this week.

Has had strong data releases last week, and the market is expecting this to change the tone of the BoC towards hawkishness again when they release their monetary policy later this week. Whether that will be the case or not remains, however, totally uncertain. CAD could be range bounce until then, so the direction for the week is unclear.

JPY: Joining ranks with the weak

Sold off very hard last week and it could easily continue to be one of the weakest currencies this week. The BoJ policy is super-accommodative. Thus the JPY has nothing much to bolster it up other than possible USD weakness. I expect to see some correction earlier in the week, before JPY continues to be sold off. North Korea however remains always an uncertainty factor.

The CHF is in a very similar situation to the JPY, except that CHFJPY showed very bullish momentum last week, which should make it the stronger currency of the two in the week ahead as well. So selling JPY is probably better than selling CHF.

I completely agree on USD expectation “…USD losses earlier in the week before having the potential to gain more strength in the 2nd half of the week, when Jobs data could provide renewed optimism…” In my opinion, the Non-Farm payrolls will be much stronger than expected, because of the end of the Year, busy season period, when everybody is hiring part-timers. Helpful insights!