All Angles of Defining the Trend Properly (part 4) 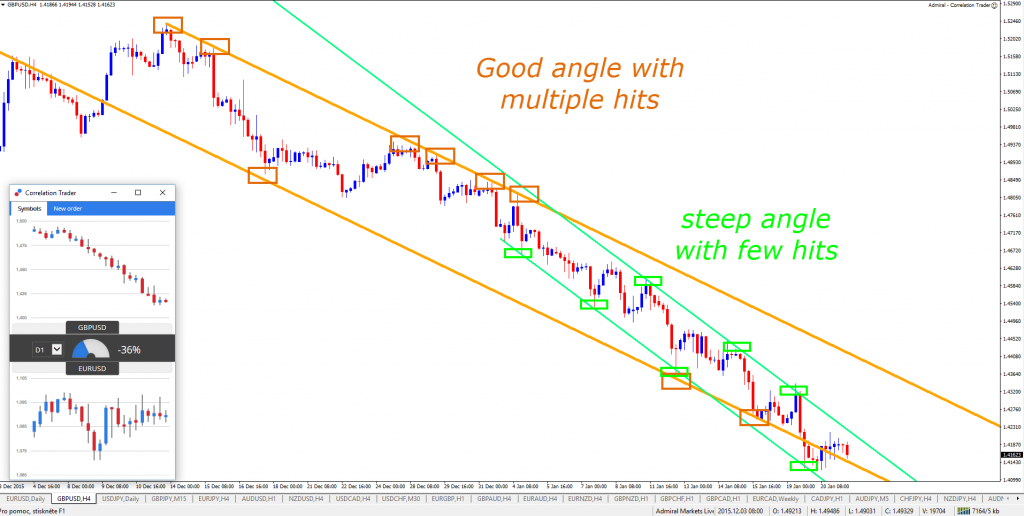 Today’s blog post focuses on how traders can use trend channels to their advantage when tackling trends, reversals and sideway price action. We will be discussing the best channel characteristics, channel expansions such as overthrow and under throw, and angles.

The best trend channels are characterized by a few important aspects:

Let us now review these points in more detail. 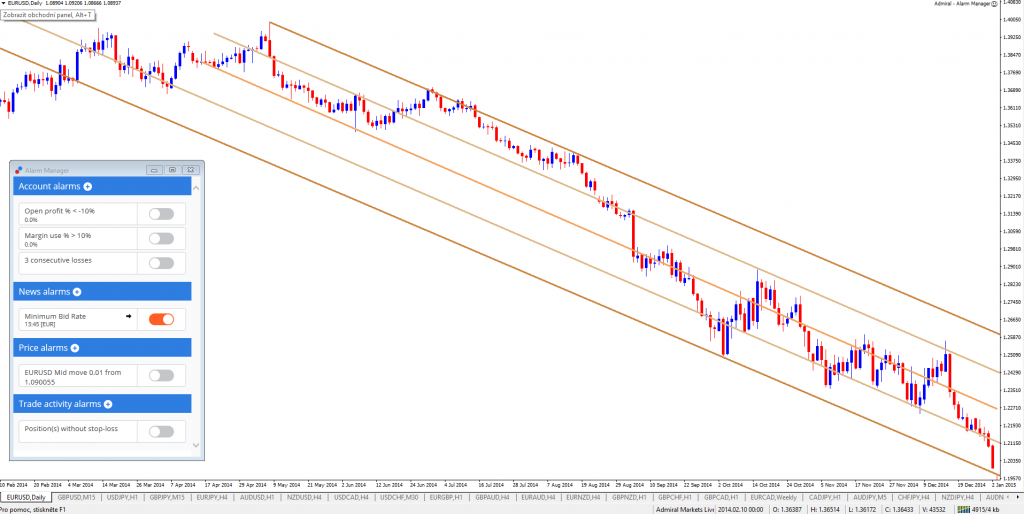 A trend channel is not supposed to be too steep or too shallow. A trend channel needs to have a balanced angle because then price is moving in a rhythm that is showing trend strength and sustainability.

This is not a trend but a momentum or impulse. Price can keep moving strongly within the momentum but eventually price will be lose its steam and need to make a bigger correction. The correction will break the channel because of its steep angle. 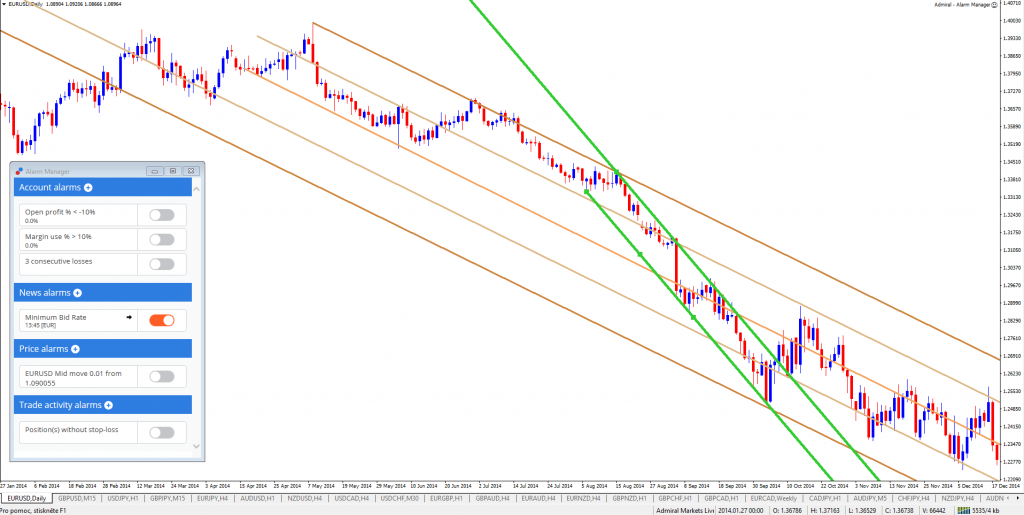 In this case price is not showing sufficient momentum in the direction of the trend. A weak angle in fact shows a corrective pattern.

In this case price is not even able to build an angle, which means that price is building a range or sideways price action zone. Price cannot trend if it’s moving flat. 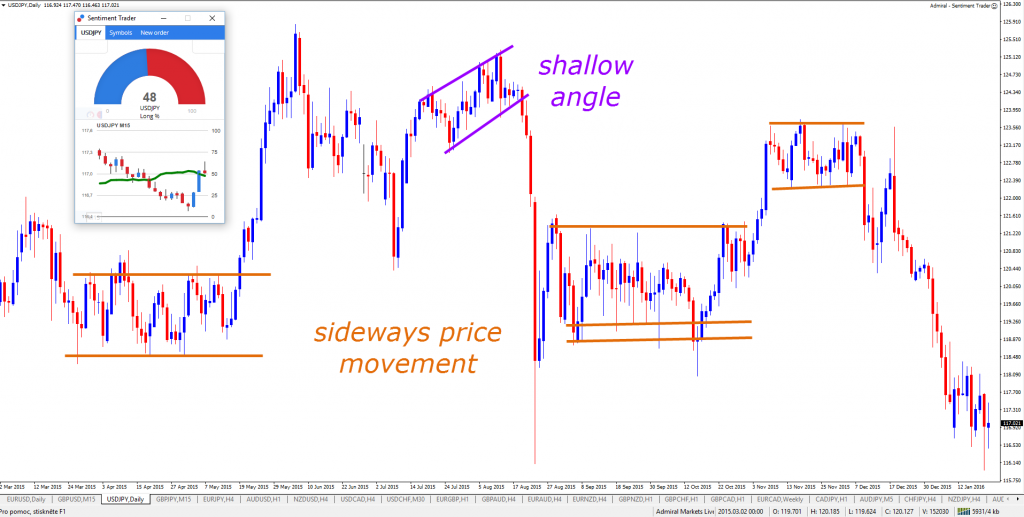 What is good, too shallow and too steep? These terms are very discretionary but we will try to quantify them, although they remain rough figures at best.

First of all, it’s best to use a chart setting where 150 to 200 candles are visible. This chart setting shows the best market memory.

Thirdly, a steep channel mostly has very impulsive price action. A trend channel will have both momentum and corrections which give it the medium angle. A sideways or shallow channel has only corrective price action but no momentum.

The minimum number of hits on the channel is 4. Anything lower than 4 is considered a potential channel. A channel becomes more established and valuable when more hits are visible.

There is nothing wrong with drawing multiple channels on the chart as long as it has relevance for your analysis. Often price is able to respect multiple trends lines and channels. Eventually of course one of the channels and trend lines will become obsolete and then a trader can remove the tool.

Price action needs to be within 30 pips from the top or bottom of the channel on a 4 hour or daily chart to be able to consinder it a full hit on the channel.

The quarter levels are important too: 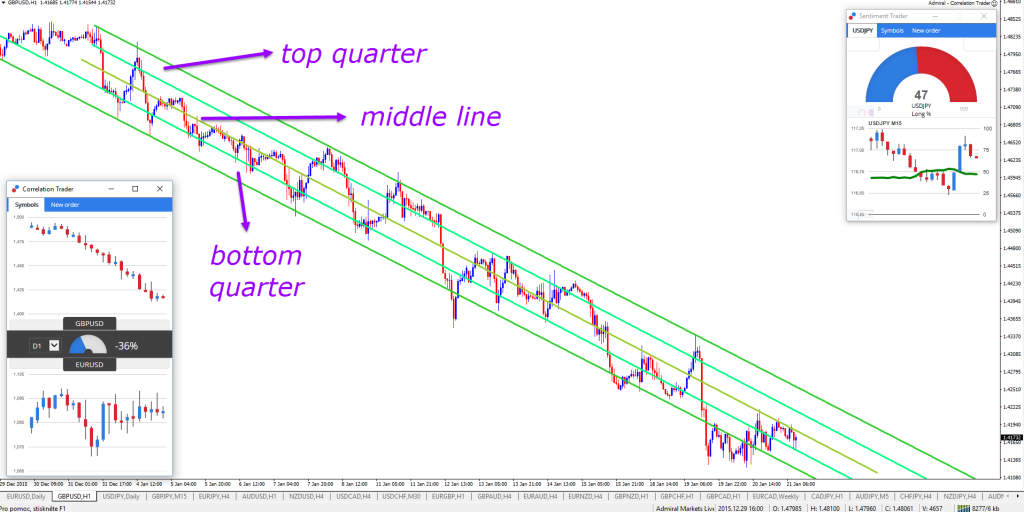 The value of a trend channel diminishes if too much price action is hanging outside of it. But some price action is allowed to be below or above it. This is technically called an overthrow and under throw. Price has then overextended beyond the channel but eventually still reverts back into the channel. It’s OK to place a channel on the chart which cuts through parts of price action. Preferably the channel only has wicks outside of its boundaries but even entire candles are acceptable if this increases the number of channel hits or improves the channel angle. 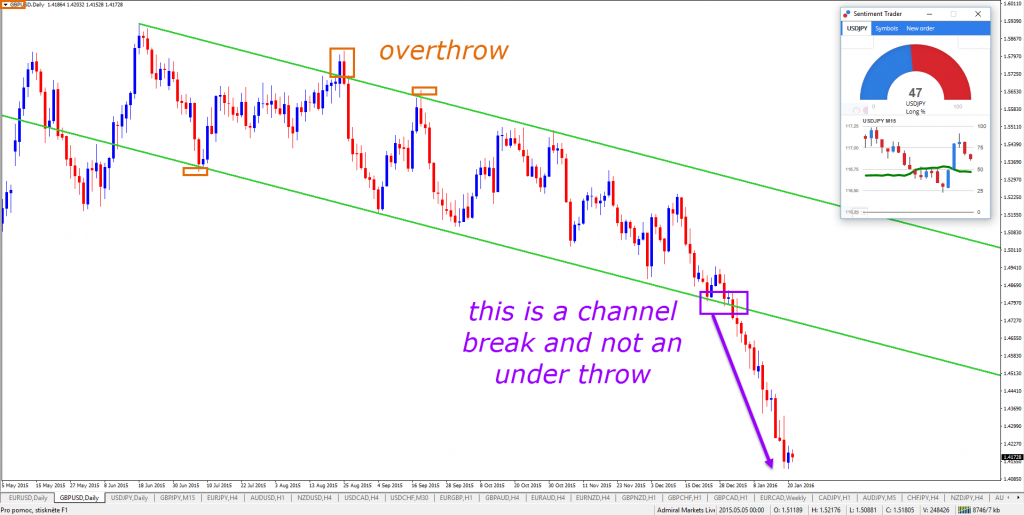