Five Big Tech Themes to Trade in 2023 by Goldman Sachs 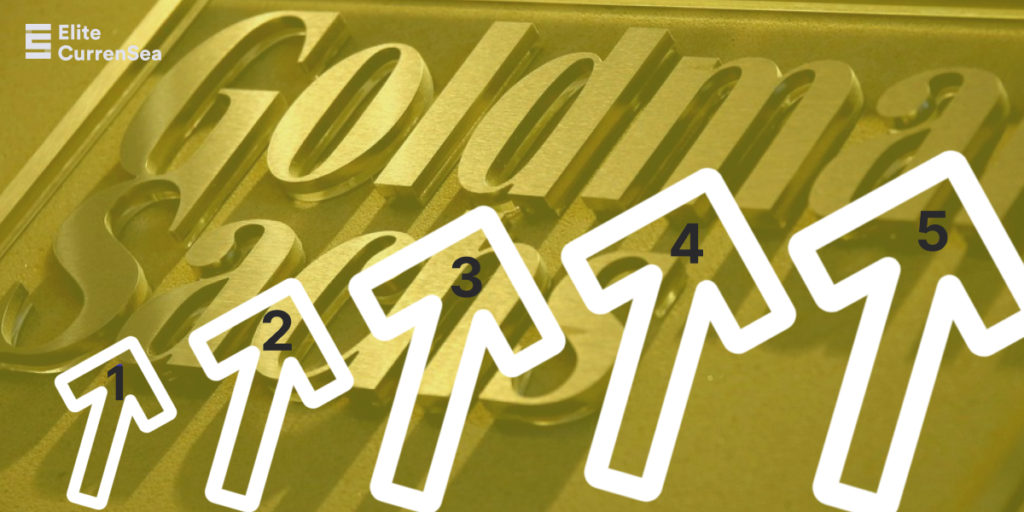 In times of uncertainty, such as now, thematic investing takes center stage. With this approach, investors can rise above the chaos and fluctuations, instead focusing on the most noteworthy trends and companies likely to take advantage of them. Technology is a great place to spot emerging trends – and Goldman Sachs has recently identified ten key areas in online and interactive technologies. Keep an eye out for these…

1. Even More Economic Value Will Be Created Online

During the pandemic-driven lockdown era, the online penetration of activities such as shopping and advertising skyrocketed. Now that the dust has settled, the question is will these gains dissipate back to pre-pandemic levels or will online’s share keep ascending? Goldman Sachs is firmly in the latter camp.

For instance, online penetration of core U.S. retail sales in 2020 rocketed from 20% to 27% – and Goldman anticipates this will maintain its pre-pandemic trajectory, ultimately rewarding those companies that do business online. 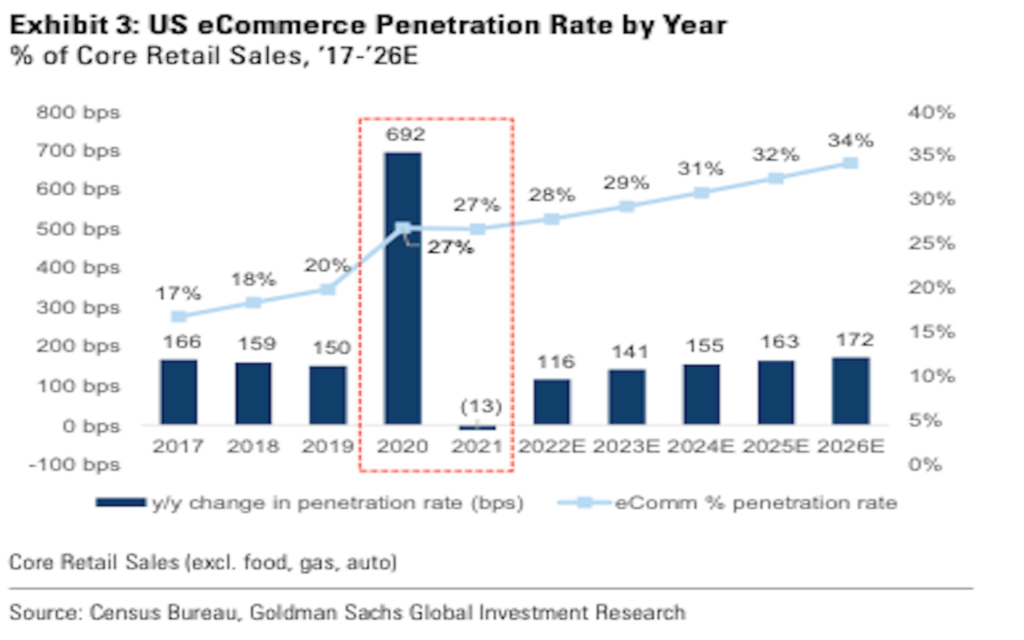 For those tech titans hoping to add to their income beyond just advertising, social commerce has been the prime target – but so far it hasn’t yielded the desired results. It likely won’t improve until the imminent period of financial hardship passes.

After that, though, the most prepared companies, as determined by the bank, will be Pinterest, Meta, and Google’s Alphabet – through its shopping functions in YouTube.

On the contrary, ecommerce tycoons are constantly increasing their advertising efforts. Amazon’s advertising sector is growing to be one of its most essential sources of revenue. Goldman Sachs anticipates unconventional participants, like Uber and DoorDash, to enter the advertisement market as well. 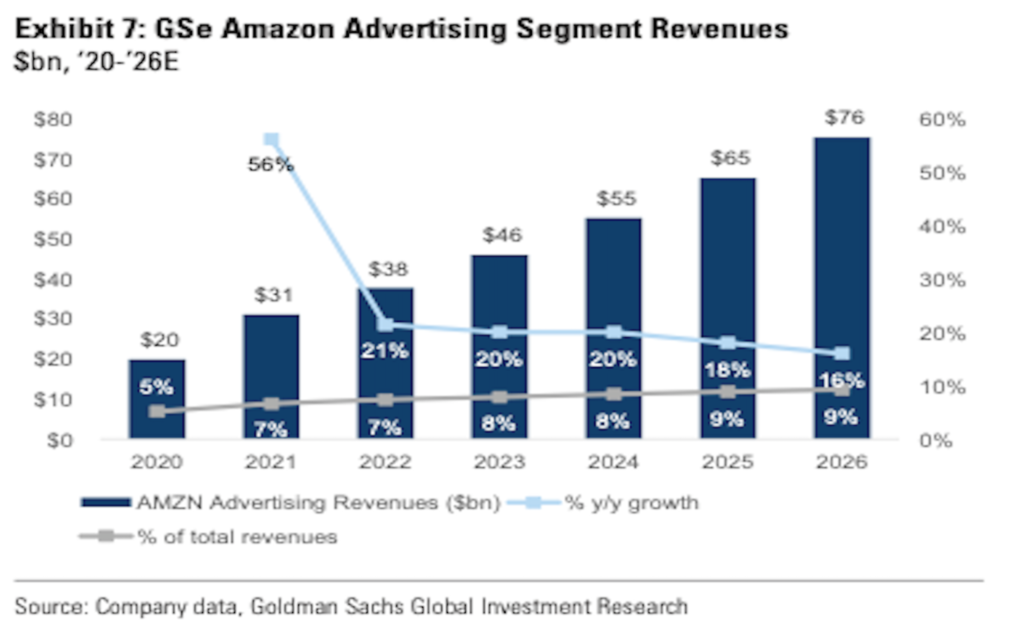 TikTok’s created an unquenchable appetite for shorter video clips, and as others have taken its lead, the portion of time that these videos have taken up has skyrocketed. But the problem for these platforms is that it’s difficult to generate money from these short-form videos – a five second TikTok is much less engaging than an Instagram story or a documentary. Google’s YouTube has definitely been impacted by this trend, despite the fact that it has thirty billion daily views of YouTube shorts. 2021 is going to be the year to see if they can turn these views into real dollars.

Love it or loathe it, TikTok has certainly put a spotlight on fame-craving influencers – resulting in a new economic system that sees entrepreneurs and businesses teaming up with the platform providers to grab a piece of the pie. It seems that this style of content is here to stay, so social media companies may soon be putting more emphasis on their finance and revenue-sharing policies – which could be significant for the aspiring celebs, but won’t necessarily do much for the major platform firms. Have a look at the graph beneath!

TikTok has cast a brilliant spotlight on fame-thirsty influencers, and regardless of our opinion of them, they are garnering more of our attention, thus creating a unique environment of entrepreneurs and companies that enter into deals with platform firms and benefit financially. Since this kind of content seems to be here to stay, social media firms will most likely up their funding and revenue-sharing agreements. This might be a great opportunity for aspiring stars, but it won’t do much for the major platform firms. See the chart below. 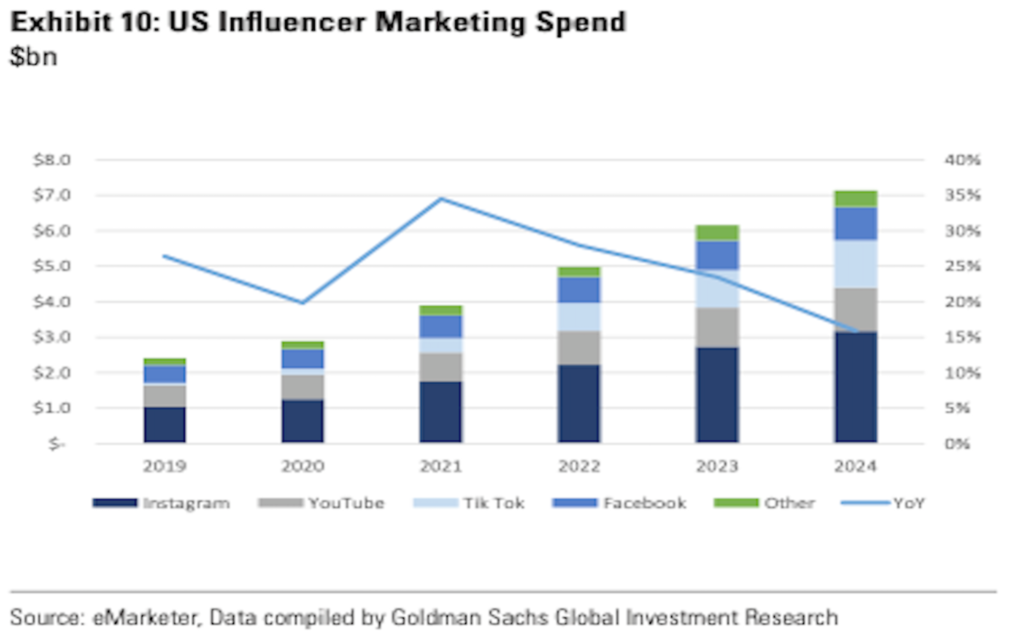 Arguably, the fate of Amazon’s AWS and Microsoft’s Azure cloud services will determine the direction of these companies’ stock prices. Yet, Goldman predicts that, due to IT budget thriftiness, the growth of cloud spending will drop significantly in 2023, to somewhere between 4 and 22 percent. This is a big deal indeed!

The range may be wide enough to drive a bus through, yet even the most generous projections are still lower than the 30%+ growth rate these companies have achieved (up to 40%+ for Azure). However, Goldman Sachs still remains confident in the long term. As the major cloud players are continuously clinching bigger contracts, there is a wealth of money to be made once those projects go live. 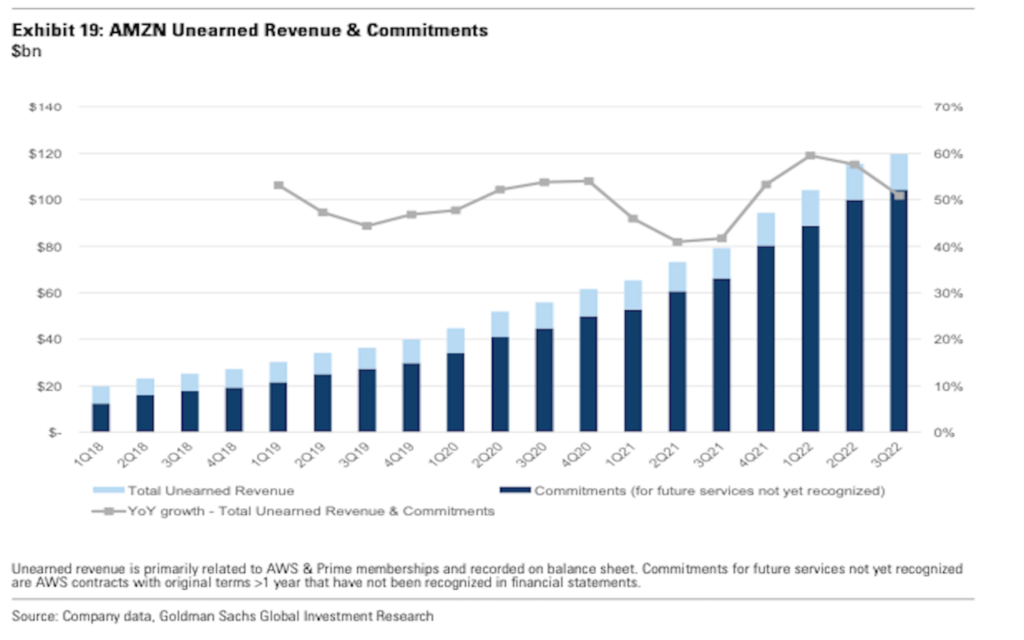 For the next decade, this could easily be on everyone’s list of the hottest trends. Nobody knows when virtual reality, augmented reality, and artificial intelligence will become part of our daily lives, but everyone agrees they are the next big things.

Goldman predicts that gaming will be the leader when it comes to virtual and augmented reality, and they anticipate Activision, Electronic Arts, and Take-Two will be the first to score high.