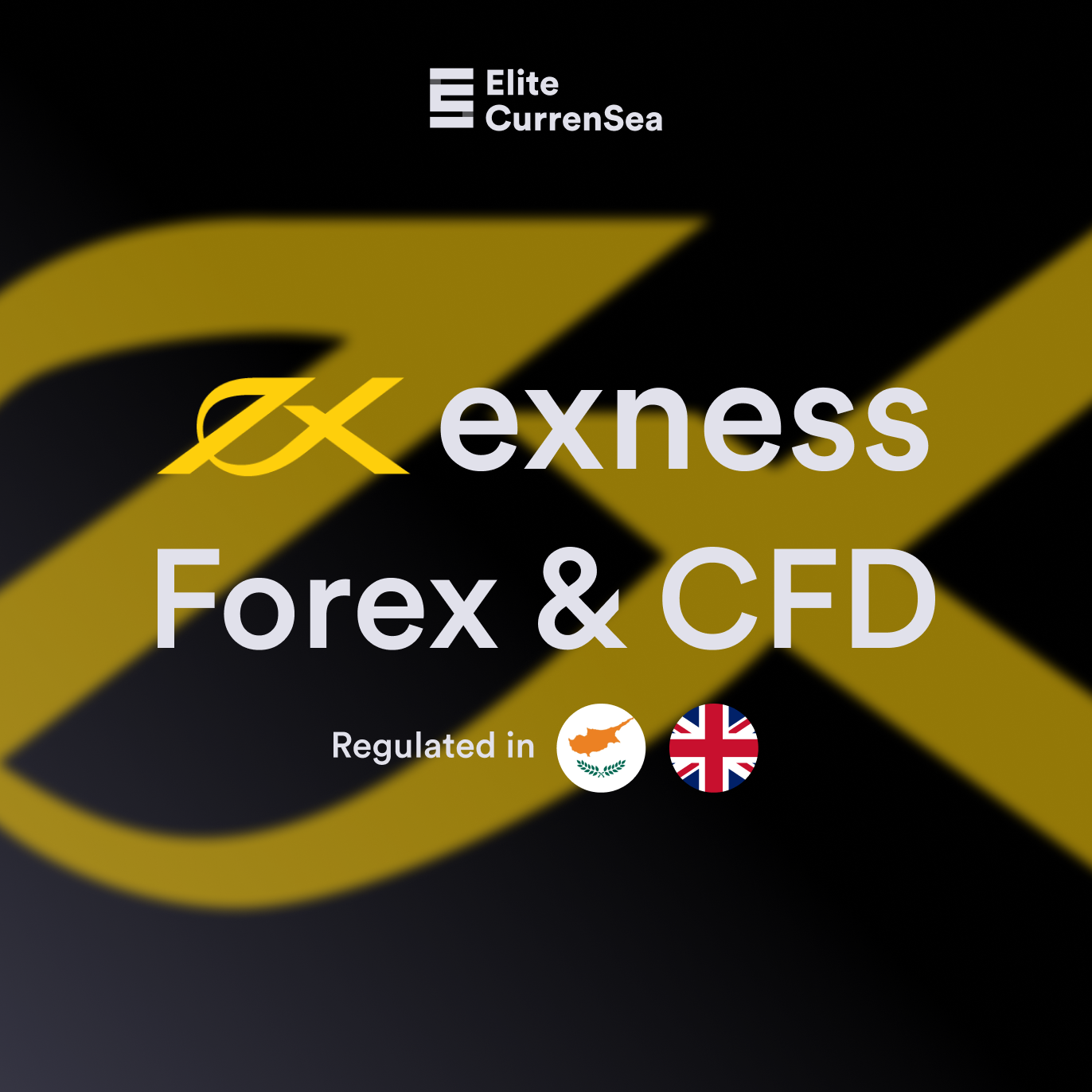 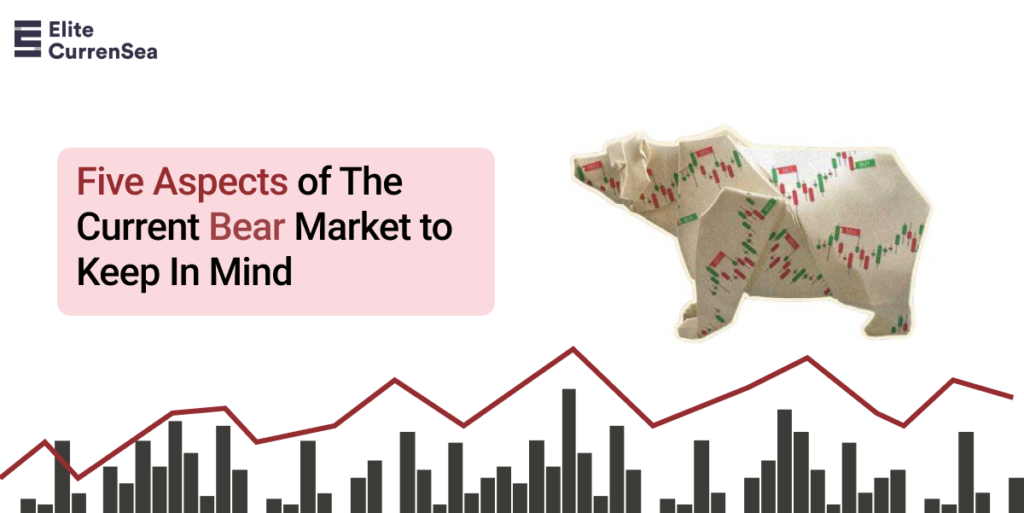 It’s been tough to make sense of this bear market with the wild swings in stock prices. But Goldman Sachs strategists say that these swings don’t necessarily send clear signals. I’ve looked at what they have said about past bear markets and isolated the key points to help you navigate this one.

Although structural bear markets have been some of the worst in terms of decline severity and length of recovery time, history would suggest that it’s unwise to get one’s hopes up for this one. Cyclical bear markets, on average, last for two years and take five years to return to their previous highs—meaning that we could be in for a long ride. 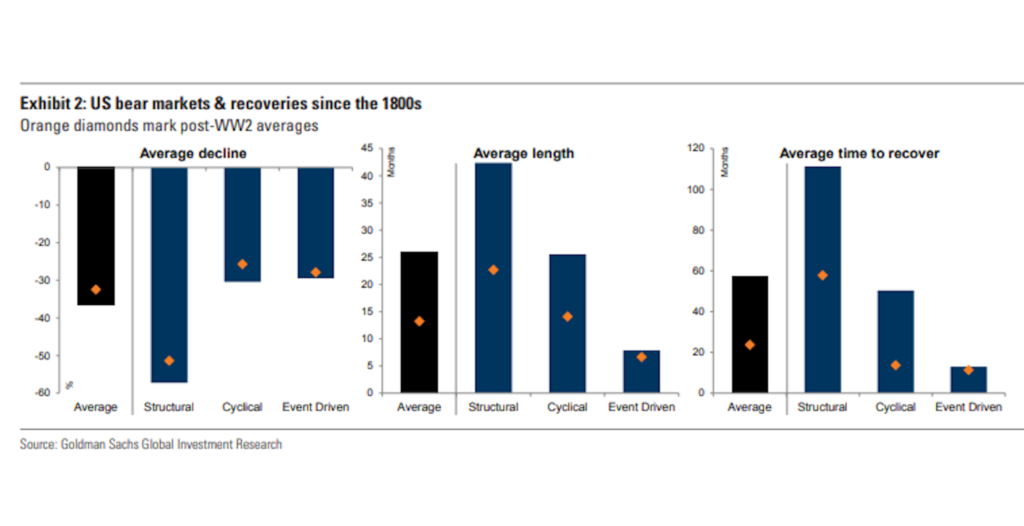 2. Buying the Dip Might Not Be The Best Idea (Shorting is an Entirely Other Matter Though)

Many people questioned whether the market’s rally in mid-June meant that the worst was over and if it was time to start buying again. But Goldman strategists say it’s too soon to tell, since we’re only in the “hope” phase of the investment cycle. Usually, there are four distinct phases in this cycle – despair, hope, growth, and optimism. The hope phase typically lasts around 10 months and happens when the market is anticipating a rebound in the economy and future profit growth.

Although rallies during bear markets are not uncommon, don’t get too excited just yet. You’ll need to see a few more signs before you can get optimistic.

3. Hard Landing is More Likely at This Point

One of the main reasons is that there has not been enough time to see the real impact of higher interest rates on the US economy.

The jury is still out on whether or not the United States will be able to avoid a recession, known as a soft landing. In fact, history is not on our side when it comes to soft landings in the US after a cycle of interest rate hikes. Out of the 14 times this has occurred since WWII, only 11 resulted in a recession within two years. 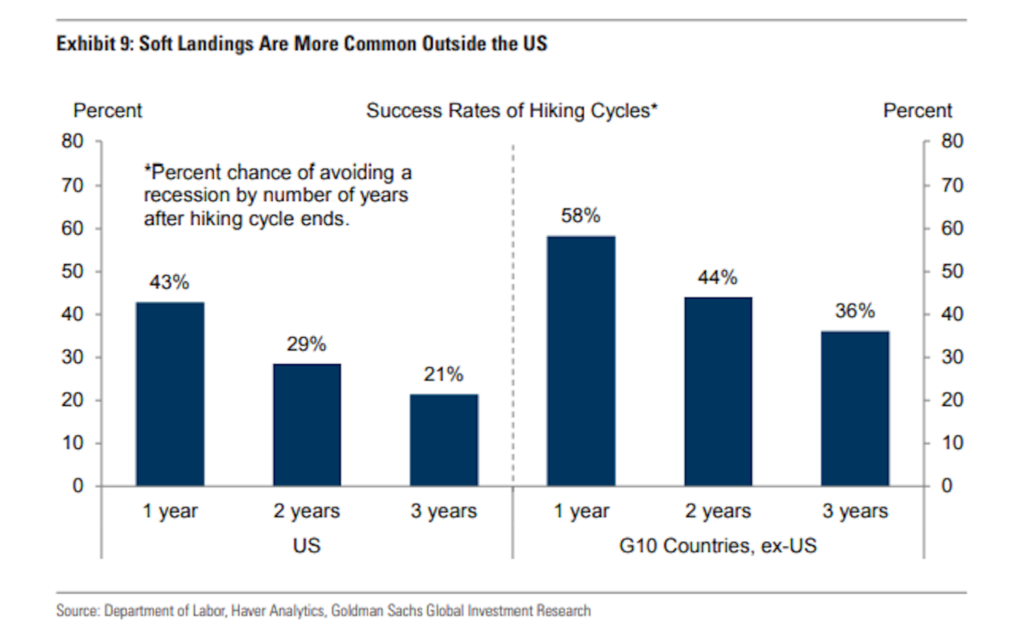 As the chart below demonstrates, these odds decrease even further when inflation is high. In current inflationary environments, monetary tools like raising interest rates are less useful since today’s inflationary pressures are primarily caused by supply-side issues, rather than demand.

A hard landing will be tough on investors. While market sentiment is typically negative and stock valuations tend to drop during both soft and hard landings, the decline is usually more severe and long-lasting in a hard landing. 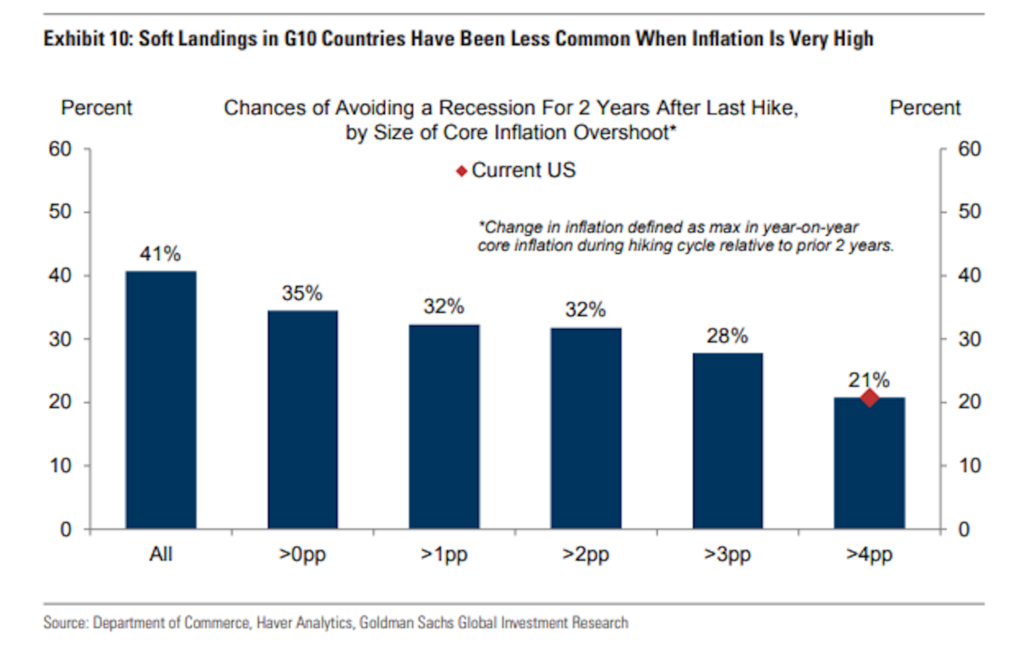 4. Four Things to Keep in Mind in Gouging Recovery

There are four key indicators that suggest an economic recovery is on the horizon: cheap valuations, a slowdown in the deterioration of the economy, a peak in interest rates and inflation, and negative positioning.

As investors anticipate a recession, valuations tend to fall. Although cheap valuations may be a necessary condition preceding a recovery, they alone aren’t enough to signal that one is on the way. You’ll also need to see shoots of improvement in the economy.

Stock markets usually fare better when growth is weak but improving, rather than when growth is strong but slowing. Most bear markets bottom out around six to nine months before a recovery in corporate earnings, which typically happens when interest rates and inflation are close to peaking.

The Federal Reserve (the Fed) is still aggressively hiking rates, and inflation is still seeing headwinds from Europe’s energy crisis.

Finally, it’s, what they say, all about expectations. The worst usually comes before the best in terms of investor positioning and sentiment – people will need to expect the former before the latter can occur.

Investment returns are likely to be weaker in the post-recovery stage compared to the recent secular bull run without low interest rates. Goldman Sachs believes returns over the next decade will be “fatter and flatter”, with a wider trading range and lower returns.

This changes how you pick winners for the next decade, including focusing less on top-line growth and looking for companies competitively positioned with strong margins and cash generation to sustain dividends.

How To Trade The Bear Market if You Are Not Planning to Invest?

The historical observations mentioned above can help you determine the equities worth shorting during the current Bear season. Shorting major stocks might sound like an easy sell, but volatility can really hamper your efforts.

If you are looking for something less panicky and sweat inducing, while perhaps waiting for buy the dip, take a look at Portfolio ECS, our flagship discretionary actively managed portfolio, where we don’t shy away from going short and long on major equities, commodities and well as Forex pairs. Alternatively, you can invest in our latest Gold Trading EA.

The markets are full of opportunities, just make sure to keep your excitement at bay and reach out, should you have any trading-related questions.