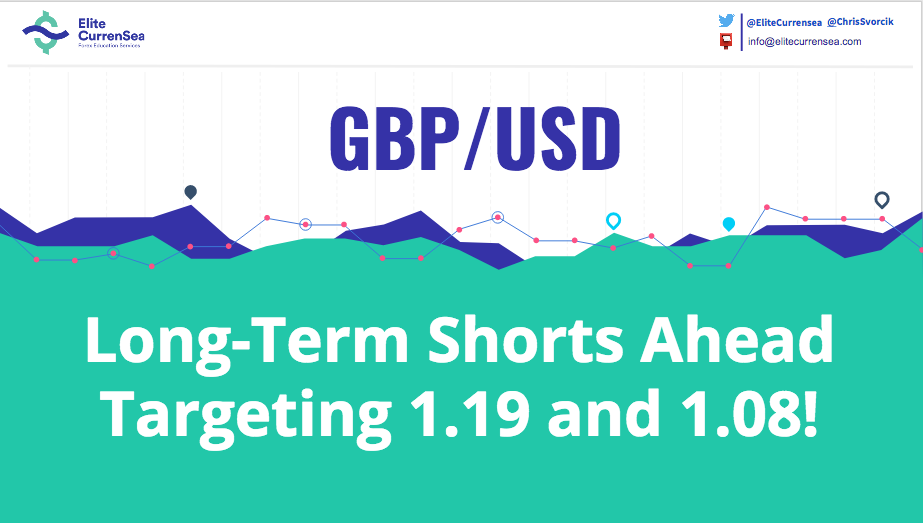 the GBP/USD is about to finish a long-term correction, which could provide some very exciting shorting opportunities in the near future.

This article will dive into a detailed analysis of the GBP/USD to highlight potential trade setups over the coming weeks.

The Monthly chart clearly shows a corrective price pattern that has been in progress ever since October 2016. The very distinct small ‘choppiness’ of the candles have created a classic bear flag pattern that forms part of a large Wave 4 (pale pink). This provides a good indication that price could easily fall further and break the last low at around 1.1900 and potentially reach 1.0830 which would be the -27.2% Fibnoacci target of pale pink Wave 3. Even if it were not a Wave 4 (but perhaps already a Wave A), a drop should still be expected in a Wave B that may test the last low of 1.1900.

Looking at the weekly chart, we can see that the corrective wave count, within pale pink Wave 4, is virtually complete. The final Y of Y of Wave 4 could be finished around the 50% fibonacci level (roughly 1.3860).

Price is culminating many degrees of waves soon…

The Daily Chart shows us that the current uptrend we are witnessing could be part of the very final impulse within the Wave 4. This creates a very interesting zone for new short positions because it would be the culmination of many degrees of waves (i.e. 5,C,Y,Y,4).

The 50% fib level around 1.3850 is an obvious candidate for such a reversal to occur, especially since it also coincides with other fib levels of different waves. But strong resistance around 1.3620 must first be broken and price may already stall there and not rise significantly further than that.

Trade setups could appear within these price zones (preferable at the 50% of 1.38 – 1.3850) in the form of a strong bearish Daily or Weekly reversal candle and further confirmation of the reversal could be obtained from a break below the moving averages on lower time frames. Another indication could be visible if price action shows clear signs of struggling to push any higher, possibly forming a double top or similar reversal patterns.

Targets for these short entries could ultimately be as low as 1.19 or even 1.08, but this would be a long-term positioning of multiple months or years.